Written by Associated Press on September 13, 2022

DENVER (AP) — The intensifying crisis facing the Colorado River amounts to what is fundamentally a math problem. 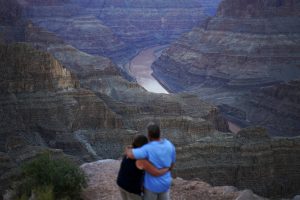 Alyssa Chubbuck, left, and Dan Bennett embrace while watching the sunset at Guano Point overlooking the Colorado River on the Hualapai reservation Monday, Aug. 15, 2022, in northwestern Arizona. In November 1922, seven land-owning white men brokered a deal to allocate water from the Colorado River, which winds through the West and ends in Mexico. During the past two decades, pressure has intensified on the river as the driest 22-year stretch in the past 1,200 years has gripped the southwestern U.S. (AP Photo/John Locher)

The 40 million people who depend on the river to fill up a glass of water at the dinner table or wash their clothes or grow food across millions of acres use significantly more each year than actually flows through the banks of the Colorado.

In fact, first sliced up 100 years ago in a document known as the Colorado River Compact, the calculation of who gets what amount of that water may never have been balanced. 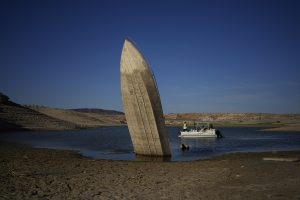 FILE – A formerly sunken boat sits upright into the air with its stern stuck in the mud along the shoreline of Lake Mead at the Lake Mead National Recreation Area, June 10, 2022, near Boulder City, Nev. In November 1922, seven land-owning white men brokered a deal to allocate water from the Colorado River, which winds through the West and ends in Mexico. During the past two decades, pressure has intensified on the river as the driest 22-year stretch in the past 1,200 years has gripped the southwestern U.S. (AP Photo/John Locher, File)

“The framers of the compact — and water leaders since then — have always either known or had access to the information that the allocations they were making were more than what the river could supply,” said Anne Castle, a senior fellow at the Getches-Wilkinson Center at the University of Colorado Law School.

EDITOR’S NOTE: This is part of a collaborative series on the Colorado River as the 100th anniversary of the historic Colorado River Compact approaches. The Associated Press, The Colorado Sun, The Albuquerque Journal, The Salt Lake Tribune, The Arizona Daily Star and The Nevada Independent are working together to explore the pressures on the river in 2022.

During the past two decades, however, the situation on the Colorado River has become significantly more unbalanced, more dire. 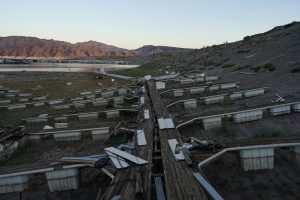 A drought scientists now believe is the driest 22-year stretch in the past 1,200 years has gripped the southwestern U.S., zapping flows in the river. What’s more, people continue to move to this part of the country. Arizona, Utah and Nevada all rank among the top 10 fastest growing states, according to U.S. Census data. 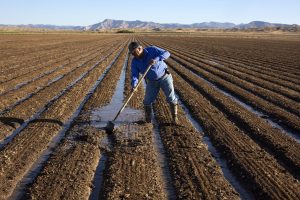 Joe Bernal works on his family’s farm on Thursday, Sept. 1, 2022, in Fruita, Colo. In November 1922, seven land-owning white men brokered a deal to allocate water from the Colorado River, which winds through the West and ends in Mexico. During the past two decades, pressure has intensified on the river as the driest 22-year stretch in the past 1,200 years has gripped the southwestern U.S. (Hugh Carey/The Colorado Sun via AP)

Until recently, water managers and politicians whose constituents rely on the river have avoided the most difficult questions about how to rebalance a system in which demand far outpaces supply. Instead, water managers have drained the country’s two largest reservoirs, Lake Mead and Lake Powell, faster than Mother Nature refills them.

In 2000, both reservoirs were about 95% full. Today, Mead and Powell are each about 27% full — once-healthy savings accounts now dangerously low.

The reservoirs are now so low that this summer Bureau of Reclamation Commissioner Camille Touton testified before the U.S. Senate Energy and Natural Resources Committee that between 2 million and 4 million acre-feet would need to be cut next year to prevent the system from reaching “critically low water levels,” threatening reservoir infrastructure and hydropower production.

The commissioner set an August deadline for the basin states to come up with options for potential water cuts. The Upper Basin states — Colorado, Utah, New Mexico and Wyoming — submitted a plan. The Lower Basin states — California, Arizona and Nevada — did not submit a combined plan.

The bureau threatened unilateral action in lieu of a basin-wide plan. When the 60-day deadline arrived, however, it did not announce any new water cuts. Instead, the bureau announced that predetermined water cuts for Arizona, Nevada and Mexico had kicked in and gave the states more time to come up with a basin-wide agreement.

A week before Touton’s deadline, the representatives of 14 Native American tribes with water rights on the river sent the Bureau of Reclamation a letter expressing concern about being left out of the negotiating process.

“What is being discussed behind closed doors among the United States and the Basin States will likely have a direct impact on Basin Tribes’ water rights and other resources and we expect and demand that you protect our interests,” tribal representatives wrote.

The initial compact was negotiated and signed on Nov. 24, 1922, by seven land-owning white men, who brokered the deal to benefit people who looked like them, said Jennifer Pitt of the National Audubon Society, who is working to restore rivers throughout the basin.

Mexico, through which the tail of the Colorado meanders before trickling into the Pacific Ocean, secured its supply through a treaty in 1944. The treaty granted 1.5 million acre-feet on top of the original 15 million acre-feet that had already been divided, 7.5 million each for the Upper and Lower Basins.

Tribes, however, still don’t have full access to the Colorado River. Although the compact briefly noted that tribal rights predate all others, it lacked specificity, forcing individual tribes to negotiate settlements or file lawsuits to quantify those rights, many of which are still unresolved. It’s important to recognize the relationship between Native and non-Native people at that time, said Daryl Vigil, water administrator for the Jicarilla Apache Nation in New Mexico.

“In 1922, my tribe was subsistence living,” Vigil said. “The only way we could survive was through government rations on a piece of land that wasn’t our traditional homeland. That’s where we were at when the foundational law of the river was created.”

Agriculture uses the majority of the water on the river, around 70% or 80% depending on what organization is making the estimate. When it comes to the difficult question of how to reduce water use, farmers and ranchers are often looked to first.
Some pilot programs have focused on paying farmers to use less water, but unanswered questions remain about how to transfer the savings to Lake Powell for storage or how to create a program in a way that would not negatively impact a farmer’s water rights.

Antiquated state laws mean the amount of water that a water right gives someone access to can be decreased if not fully used.

That’s why the Camblin family ranch in Craig in northwest Colorado plans to flood irrigate once a decade, despite recently upgrading to an expensive, water-conserving pivot irrigation system. Nine years out of 10, they’ll receive payment from a conservation group in exchange for leaving the surplus water in the river. But in Colorado, the state revokes water rights after 10 years if they aren’t used.

Not only would losing that right mean they can’t access a backup water supply should their pivot system fail, but their property’s value would plummet, Mike Camblin explained. He runs a yearling cattle operation with his wife and daughter, and says an acre of land without water sells for $1,000, about a fifth of what it would sell for with a water right attached.

There are other ways to improve efficiency, but money is still often a barrier.

Wastewater recycling is growing across the region, albeit slowly, as it requires massive infrastructure overhauls. San Diego built a robust desalination plant to turn seawater to drinking water, and yet some agricultural users are trying to get out of their contract since the water is so expensive. Some cities are integrating natural wastewater filtration into their landscaping before the water flows back to the river. It’s all feasible, but is costly, and those costs often get passed directly to water users.

One of the biggest opportunities for water conservation is changing the way our landscapes look, said Lindsay Rogers, a water policy analyst at Western Resource Advocates, a nonprofit dedicated to protecting water and land in the West.

Converting a significant amount of outdoor landscaping to more drought-tolerant plants would require a combination of policies and incentives, Rogers explained. “Those are going to be really critical to closing our supply-demand gap.”

After years of incentive programs for residents, Las Vegas recently outlawed all nonfunctional grass by 2026, setting a blueprint for other Western communities. For years, the city has also paid residents to rip out their lawns.

Several water agencies, including the one that serves Las Vegas, recently wrote to the Bureau of Reclamation committing to more water reuse and lawn replacement. Denver Water signed it, although it does not offer incentives for replacing residential lawns. Its neighbor, Aurora Water, has done so for 15 years and recently restricted non-functional grass in new housing.

Still, regardless of the type of water use, more concessions must be made.

“The law of the river is not suited to what the river has become and what we see it increasingly becoming,” Audubon’s Pitt said. “It was built on the expectation of a larger water supply than we have.” 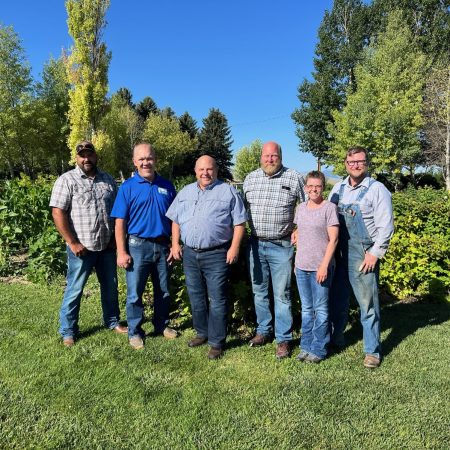 King cheered in Belfast, queen’s coffin to return to London 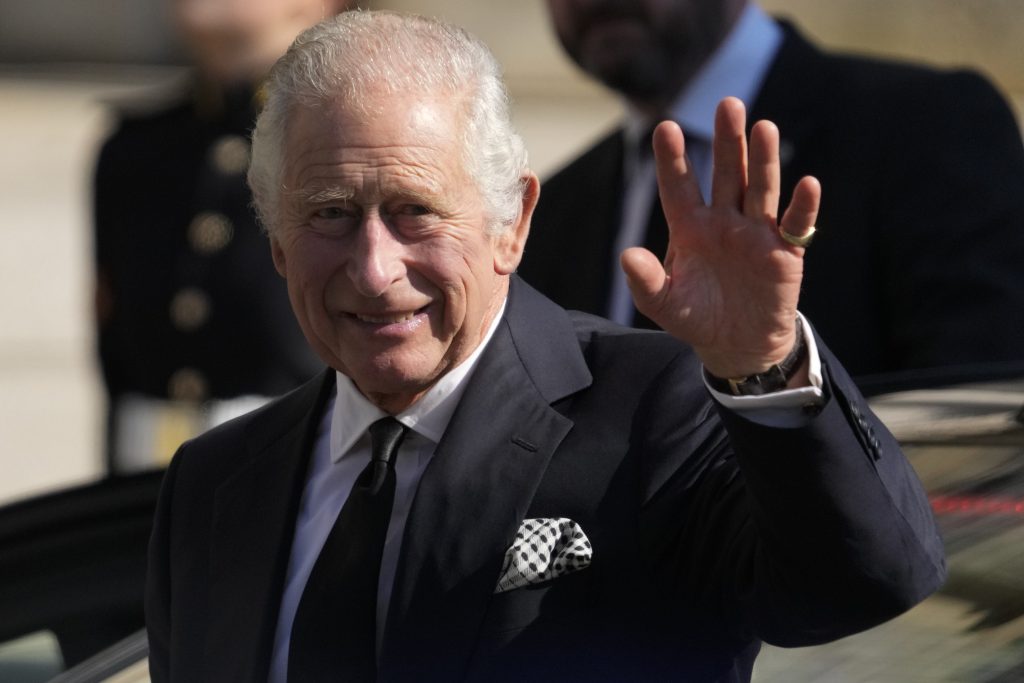