The Cody Police Department is looking for an armed female hotel robber, currently at large after stealing money from the front desk of the Holiday Inn.

A woman is believed to have robbed the Holiday Inn in the early hours of Monday, March 14. Now, the Cody Police Department is looking for anyone with information on the crime.

At approximately 5:09 a.m., Cody Police Officers responded to the Holiday Inn (1701 Sheridan Avenue) on a report of a robbery at the front desk. Officers arrived by 5:12 a.m. but were unable to locate the suspect.

Witnesses say the suspect wore a black hooded sweatshirt, black pants, and a black gator-type face mask. There are currently no identified suspects.

According to witnesses, a masked female wearing a black hooded sweatshirt entered the hotel’s front door and approached a front desk clerk. The suspect demanded money, lifting the side of her sweatshirt to expose a holstered pistol on her hip.

The clerk placed an undisclosed sum of money in a bag and gave it to the suspect. Then, the suspect walked out the front door and left in an unknown direction.

Officers “canvased the area” of the Holiday Inn, looking for any sign of the suspect. Unfortunately, the suspect was not found and remained at large. 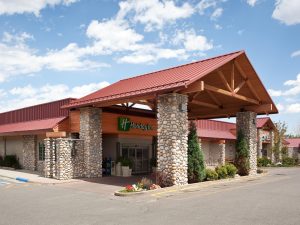 Anyone with information about this crime is encouraged to contact Cody Police Det. Sgt. Trapp Heydenberk at (307) 527-8700.

The Park County Sheriff’s Office also offers an anonymous “Tip Line” that can be utilized thru their website. The “Tip Line” is not monitored 24 hours a day and should never be used in an emergency.