Written by Andrew-Rossi on September 1, 2022

Sleeping Giant is eyeing an early December opening this winter, with all the ski area’s hills, amenities, and opportunities available for the 2022-2023 season.

In the final weeks of summer, Sleeping Giant is giving Wyomingites something to look forward to this winter. On Thursday, Sept. 1, Nick and Yulia Piazza – the owners of Sleeping Giant – sent an announcement to “friends” via the ski hill’s email subscription list.

“After going through a challenging few months and a lot of internal debate about what our priorities should be this year,” the announcement reads, “we are pleased to announce that we have begun work to launch the 22/23 Winter Season at Sleeping Giant.” 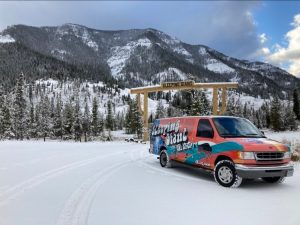 Pre-season pass sales with begin on October 1 with a targetted opening date of the first weekend of December (weather permitting.)

The Piazzas promise this season will feature everything visitors and season pass holders have enjoyed about the hill since it changed ownership in 2020.

“We expect to launch all the activities and amenities that you know and love, including night skiing, tubing, and the snow bar,” the announcement continues.

New additions include the expansion of the ski area’s fleet of SnoGo bikes. Piazza believes these devices help novice skiers “get out on the mountain and enjoy the slopes.”

Sleeping Giant is also promoting its new ride-share initiative – Giant Ride – to get more people to the area for winter fun.

Nick Piazza spent much of his life and career working in Ukraine and Georgia. Since the beginning of the Russian invasion of Ukraine, he and his family have supported and advocated for the country and its military at every opportunity.

Sleeping Giant announced it would donate all ticket sales from the last weekend of the 2021-2022 season (March 5 & 6, 2022) to the Ukrainian Army. March 5 became the busiest day of the entire season, and over $9,000 was raised and donated to the cause.

Other positions – maintenance staff, lodge staff, instructors, and liftees – are also open for the winter season. Interested applicants can send their resumes to the General Manager’s office at GM@skisg.com.

As the third year of the Piazzas’ ownership of Sleeping Giant begins, the owners retain the spirit of optimism that saved the ski hill from closure and sets the foundation for the future.

The announcement ends with a promise – as long as the community keeps coming to play at Sleeping Giant, the area will be open to them.

“We look forward to seeing you this winter and promise if you come out and support your hometown mountain, we’ll keep the bullwheels turning.