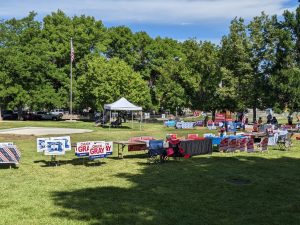 The forum took take place from 9 a.m. to 12 p.m at Cody’s City Park and Mayor Matt Hall introduced candidates throughout the event.

Regarding the event, Forward Cody stated, “Our Government is led by individuals willing to place their name on a ballot seeking support for their candidacy.  Often, in the fervor of the election season, we get overwhelmed by the media advertisements and the yard signs.  While for many these provide an indication of who’s running and for what, any depth of knowledge about a particular candidate is lacking.”

Troy Bray, running for State Representative District 25, was critical of local government saying that every penny taken out in taxes impacts the economy.

State Representative District 24 candidate Nina Webber argued that she is the only conservative candidate in the race. Webber opposes tax increases as well as new taxes. She also mentioned that voters are concerned about Critical Race Theory in public education. Further, she called Park County’s recent property tax increases “absolutely insane,” and said, “vote out these people who want to tax us into oblivion.” 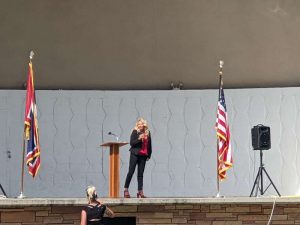 Incumbent for District 24, Sandy Newsome, said that tourism in Wyoming is alive and well, noting the importance the industry plays in the state. Newsome congratulated Cam Sholly on safely reopening Yellowstone National Park quickly after record flooding. As a charter member of Forward Cody, Newsome calls herself a “champion of tourism” and a “champion of economic development.”

Leda Pojman, running for Park County Attorney, has spent 15 years as a prosecutor at the state and local level. “I’m adaptable to the changes that are coming,” Pojman says.

Park County Attorney Brian Skoric is running for re-election where he plans to continue to serve park county effectively. “Experience does matter,” Skoric says. Having worked on thousands of cases, prosecuting crimes is one small part of his job, Skoric says. “My number one goal is to keep park county park county,” Skoric emphasizes.

Emily Denning, a U.S. Army veteran, and former Veterinary Technician is running for Park County Coroner. She plans to work hard for Park County with her 8 years of experience as Deputy Coroner, Denning says. “My biggest concern about park county is the families of park county,” Denning states. Denning is not affiliated with a funeral home, and she was critical of those running for the office who are attached to a funeral home calling it a “conflict of interest.” 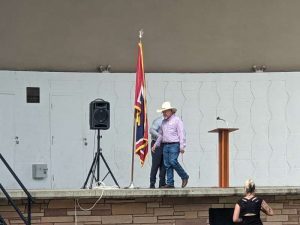 Tim Lasseter is running against incumbent Colleen Renner for Park County Clerk. Lasseter called Ms. Renner a “nice lady” but noted that he has “different ideas” about various issues. “Election integrity is an issue here and across the country,” Lasseter says. “I don’t blindly trust technology,” Lasseter said in response to the public testing of voting machines in Park County. He says there are sacrifices one makes to run for public office mentioning a “hit piece” in the paper with Al Simpson.

Matt Scott, a candidate for Park County Commissioner, describes himself as fiscally conservative. Scott is a native of Park County and has a bachelor’s degree in finance from the University of Wyoming. Regarding tourism and the influx of new residents, Scott jokes, “People are going to keep coming here until Yellowstone blows.” Scott discussed the housing issues in Park County saying that there is not much point in bringing new businesses to Cody if “we can’t house people.” Scott would like to see more trade schools and more vocational education in Wyoming. He also noted that as a commissioner, he would never tell private businesses what to do.

Lloyd Thiel, one of two incumbents running for re-election as a Park County Commissioner, argues that his experience as a self-employed excavation contractor and rancher gives him unique insight into tough problems. “I believe I can hopefully spend your money the way you want to give you the best bang for your buck,” Thiel says. He thanked the Cody Chamber of Commerce and the Park County Travel Council for assistance with economic development saying he would like to make it easier for businesses to prosper here.

Dossie Overfield, also running as an incumbent, is aware of how state and county regulations impact residents, she says. “I love what I’m doing right now…I love trying to solve problems,” Overfield says. Overfield describes the importance of the Park County Land Use Plan. “If we want our kids to live here, we have to think about where they’re going to live and what kinds of jobs they’re going to have,” Overfield emphasizes. She also mentioned that Park County doesn’t need more regulation, but it does need better regulation, saying, “We need to update the regulations a lot.”

Don Shreve, who is running for City Council, called himself a coalition builder and not a faction creator. Mr. Shreve wants to make sure city employees stay in the city because of valuable expertise developed on the job.  “I’m the only candidate who has gone door to door,” Shreve says. 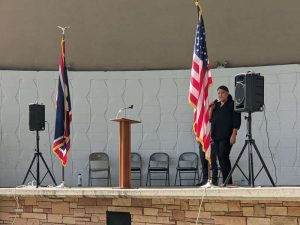 Lynette Greybull is running for the U.S. House of Representatives. She thanked the audience, saying, “I’m honored to be here before you today.” Greybull describes herself as a community builder. Greybull wants to be a representative who can advocate on the tribal and state level, saying, “I believe in change.” She noted that she does not represent the 1% but instead represents broad and common interests.