EVANSVILLE, Ind. (AP) — Authorities worked Thursday to determine the cause of a house explosion in a southern Indiana neighborhood that killed three people and left another person hospitalized. 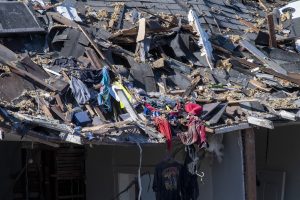 Debris hangs from a damaged home, Thursday, Aug. 11, 2022, in Evansville, Ind., as authorities work to determine the cause of a house explosion that killed three people and left another person hospitalized. The explosion the day before damaged 39 homes. (MaCabe Brown/Evansville Courier & Press via AP)

The explosion Wednesday afternoon in Evansville damaged 39 homes. Crews on Thursday completed a secondary search of buildings that were left unstable by the explosion and no more victims were found, Fire Chief Mike Connelly told reporters.

“It’s a huge relief, for everybody,” the chief said of the results of the secondary search.

Eleven of the damaged homes were uninhabitable and will have to be demolished, Connelly said, and finding a cause is expected to be a “very tedious process — and lengthy.” 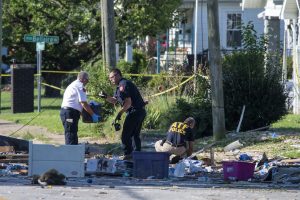 Emergency personnel search the debris, Thursday, Aug. 11, 2022, in Evansville, Ind., as authorities work to determine the cause of a house explosion that killed three people and left another person hospitalized. The explosion the day before damaged 39 homes. (MaCabe Brown/Evansville Courier & Press via AP)

The Vanderburgh County Coroner’s Office identified the victims as a married couple, 43-year-old Charles Hite and 37-year-old Martina Hite, and 29-year-old neighbor Jessica Teague. The cause and manner of their deaths have not yet been determined, the office said.

Suzanne Dabkowski, a Bureau of Alcohol, Tobacco, Firearms and Explosives, spokeswoman, said the agency can’t speak to any possible causes of the explosion. Dabkowski said the ATF has explosive specialists and firearms investigators on-site in Evansville who were helping with the investigation.

The ATF’s involvement does not mean there is an intentional or illegal act behind them, she added. Typically, the agency gets involved in local cases when its help is requested or if there is some federal connection, Dabkowski said.

“When we come to these types of events we’ve either been asked in by the local fire officials or the state fire marshal for our agents who have had additional training,” she said. “We can be extra hands to help them. Most places aren’t used to seeing a scene of this size.” 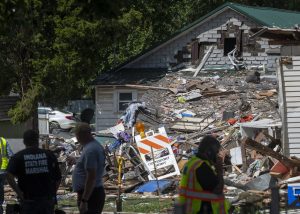 Multiple agencies investigate the scene the morning after a house explosion in the 1000 block of North Weinbach Avenue in Evansville, Ind., Thursday, Aug. 11, 2022. (MaCabe Brown/Evansville Courier & Press via AP)

Evansville authorities have declined to speculate whether natural gas or another issue is responsible for the explosion.

Evansville is along Indiana’s border with Kentucky. The blast left debris that included wooden boards, window glass and insulation strewn over a 100-foot (30-meter) radius.

CenterPoint Energy, the local gas utility, was last called to the home in January 2018, according to Connelly.

The utility said it was working with fire officials and other agencies as the investigation continues.

It was the second house explosion in the area in just over five years. A June 27, 2017, explosion killed two people and injured three others.

Wednesday’s explosion also brought to mind a massive blast in 2012 that destroyed or damaged more than 80 homes in Indianapolis and killed two people. A man was convicted of tampering with a natural gas line at his then-girlfriend’s home in an attempt to commit insurance fraud.

According the U.S. Department of Transportation’s Pipeline and Hazardous Materials Safety Administration’s public database on accident reports involving gas distribution systems, at least 40 such accidents have caused 59 fatalities since 2010 on private property, including homes.

The highest death count in a single accident during that time was in 2014, when an explosion and fire destroyed two buildings in New York City’s Harlem, according to the agency’s records. Eight people died and 48 more were injured. The National Transportation Safety Board later attributed the explosion to a defective joint that allowed natural gas to leak into the building, worsened by a sewer line breach that caused the gas line to sag.

The public database reviewed by The Associated Press on Thursday did not include the 2017 explosion in Evansville that killed two people. Messages for agency representatives seeking information about why that explosion was not included were not immediately returned.