It was the battle of the Broncs Friday at Spike Vannoy Stadium as the Cody Broncs played host to the Jackson Broncs for the final game of the regular season.

On senior night, Cody would cap off a come from behind victory with a seven yard touchdown pass from Luke Talich to Drew Trotter to defeat Jackson, 21-15 and claim the conference title.

Picking things up in the fourth quarter, after a defensive stand, Cody got the ball back with just over a minute of regulation to play and found themselves down by two with 40 yards to go. Head Coach Matt McFadden dialed up a gem of a play that sprung Chaz Cowie 33 yards downd the field and set up the Cody Broncs with a first and goal from the seven yard line. After two incomplete passes, Talich would find a wide open Trotter in the corner of the end-zone on a across the field pass that proved to be the game winning play.

Both teams would each score in the first half with Cody finding pay dirt on their opening drive thanks to a 54 yard touchdown run from Jackson Schroeder. Jackson would take the lead late in the first quarter on a 3 yard QB keeper from Sadler Smith and Jackson led 8-7 after one quarter.

Both teams would trade scores in the second and it was the special teams of Jackson that made the difference early on. They converted a 2-point conversion on their first score and then scored on a blocked punt touchdown that put them ahead 15-13 at the half.

It was all defense in the second half. Jackson was able to move the ball well but when it came time to make a big play defensively Cody was there, non bigger than Talich’s forced fumble late in the game.

Behind that opportunistic defense and never say die attitude the Broncs, of Cody, can call themselves conference champs, they’re the No. 1 seed out of the west for the playoffs and have home field advantage.

With the win, the Cody Broncs finish the season a perfect 8-0, 5-0 in conference play.

Up Next: It’s the first round of the playoffs on Friday October 29th. Cody will host Worland. 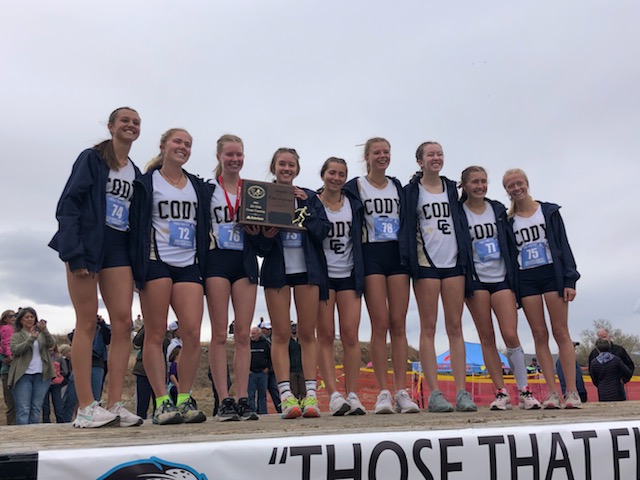