Two trapped hikers are rescued after a week stranded without food, water, or the ability to call for help in a remote area of the Big Horn Mountains.

Big Horn County Search and Rescue embarked on a special rescue mission. However, there was an added urgency to their efforts, as the victims had spent over a week lost in the Big Horn Mountains.

According to the Big Horn County Sheriff’s Office, a couple from Powell left the Porcupine Falls area on Wednesday, July 18. During their hike, the couple ran out of food and water, and one began experiencing medical complications.

They tried hiking off the Little Mountain area towards the road. However, with the intense heat and lack of water, they became dehydrated. Furthermore, the one victim’s medical condition was rapidly deteriorating.

After a prolonged effort, the victims found themselves stranded on a rimrock cliff area. They were unable to proceed up or down any further due to the extremely steep terrain. 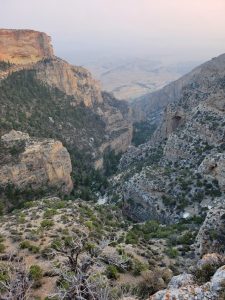 The remote location meant neither person had adequate cell phone service to call for help. As a result, the couple was trapped in the Simmons Canyon area – on the face of the Big Horn Mountains – for over a week.

Late in the afternoon of Monday, July 26, the couple managed to get cell phone service. They contacted the Big Horn County Sheriff’s Office requesting assistance.

North and South Big Horn County Search and Rescue units deployed to the area where the couple was located. After a rapid ascent, the teams managed to contact the victims.

Both adults were suffering from exhaustion, dehydration, and medical conditions exacerbated by the ordeal. In addition, one victim was badly sunburned.

Due to their condition, neither victim could be moved that evening. Luckily, rescue personnel brought food, water, and medical supplies, caring for the victims through the night.

During the night, arrangements were made for a Tuesday evacuation out of the mountains.

The victims were hoisted and transported to a waiting North Big Horn Ambulance and medical personnel near the causeway at Highway 14AE. 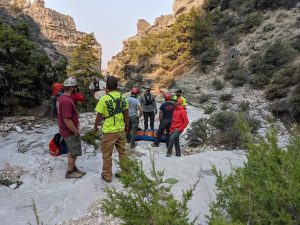 After such a harrowing ordeal, both adults are expected to make a complete recovery.

The Big Horn County Sheriff’s Office sends a special thank you to the Wyoming Air National Guard for their response and acceptance of the difficult mission. In addition, special thanks go to the Big Horn County Search and Rescue units for their extraordinary efforts to “dig in a stay the night.” This situation could have had tragic consequences without their rapid response.

Every Search and Rescue operation is a lesson learned. With the ongoing hot, dry weather throughout northwest Wyoming, everyone should be extremely cautious. When going out for an outdoor excursion, bring plenty of water, sunscreen, and clothing.