Forward Cody recently published a document aimed at transparency and education regarding its operations, practices, and strategic goals. The organization has often been criticized for failing to meet the community’s expectations and, at times, Forward Cody has been misunderstood. 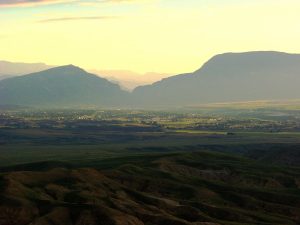 It is worth mentioning that economic development agencies and entrepreneurship incubators are not uncommon in towns and cities across the United States. The purpose of Forward Cody, as explained in their new “15 Years of Moving Forward” document, is to be “the community’s leader, partner advocate, and facilitator in the continuing development of a vibrant economy in the area.”

Forward Cody emerged from a Cody Country Chamber of Commerce committee . For many years the Cody Economic Development Council served as Cody’s main economic development arm, receiving financial support from the City and the County. As Forward Cody explains, “In the early 1990s, the Chamber Director and Economic Development positions were merged as there was a sense that these efforts needed consolidation.”

In 2008, Forward Cody became an official entity with a corporate charter and leadership team in place. Officially registered as Forward Cody Wyoming, Inc., the organization is a non-profit corporation. In 2008, James Klessens became the first President and CEO of the corporation. Deni Hirsh was recently hired as the Chief Development Officer.

Discussing the reason for the creation of “15 Years of Moving Forward,” Klessens says, “We’ve spent the last several years just doing stuff, not really talking about it too much…there’s a lot of negative chatter about what we don’t do and last spring my board said, you know, we’ve got to get better at telling people what we’re doing.”

As a 501 (c) 6 with tax exemption as a “league of business,” Forward Cody does not pay federal income taxes, but does pay sales and use taxes in addition to property taxes. Further, Forward Cody is a “member-led” entity. Individuals and businesses have the ability to choose a level of membership support that best reflects their needs.

According to their new informational document, Forward Cody spends “80%” of its time working with businesses that already exist in Cody. Forward Cody writes, “Business technical assistance has been the pillar of the Forward Cody program since its inception. We have assisted local businesses with around 1,000 projects.” In 2021, they provided “$3.1 million” dollars in funding assistance.

Addressing their limited transparency, Forward Cody says, “We value the privacy of our clients, which is why you will not see or hear us speak publicly about our clients unless they give us permission.”

Cody Laboratoires is one project that has received public criticism. The specifics of that project are relatively complicated. Cody Labs was one of six companies in the U.S. to have the license required to import raw poppy straw. The Lannett Company, which is a generic manufacturer of “final dosage opioid products,” acquired Cody Labs in 2007. The company quickly grew having over 80 employees by 2008.

In 2012, the Cody Labs Warehouse emerged because of a need for “major expansion.” This growth, however, concerned neighbors and local government officials. The heavy industrial portion of Cody Labs moved to the North Cody Industrial Park on Road 2AB. Foward Cody helped package a “finance deal” and “assisted in the development of a 12,000 sq. ft, hazardous materials warehouse on a 9.01 acre parcel.”

A change in corporate leadership at the Lannett Company resulted in halting the next stage of construction for the project. By June of 2018, operations in Cody had ceased due to “the removal of opioid products from their production” and this resulted in “135 employees being laid off.” In 2019, the facility closed.

Despite the closure, the Lannett Company’s decision to expand generic prescription drug production in Cody had been influenced by local and state solicitations—in other words, Forward Cody had not acted alone in the venture.

In 2015, the Gunwerks company contacted Forward Cody requesting use of the Light Manufactauring Incubator, an initiative funded by the Wyoming Business Council in 2009, as a place to scale and expand their operations.

During the fall of 2018, the Wyoming Business Council approved a “$3-million-dollar grant” to construct a new Gunwerks building, which Forward Cody owns. Gunwerks agreed to create “66 positions” with an average wage of “$ 60,293” by 2025 in return for the use of public funds to construct the facility. So far, this project has been noticeably successful.

Over 90% of Forward Cody’s budget comes from project revenue and memberships with roughly 9.4% coming from local government.

Executive Director of the Cody Country Chamber of Commerce Tina Hoebelheinrich says of Forward Cody, “There are great opportunities for businesses here in Cody. Those opportunities are enhanced by access to professionals who are experts in economic development, entrepreneurship, and the programs offered by the Wyoming Business Council. Foward Cody is a critical partner in growing existing business and attracting new business.”

Representative Sandy Newsome and her husband Bob were charter members of Forward Cody. Newsome states, “We are proud of the work they do. The primary goal is to support existing businesses and help them grow. Economic development is a hard business and Foward Cody has done and continues to do a great job promoting Cody as a great place to start and grow your business.”

Forward Cody has a plan for the next 15 years, saying, “We have learned quite a lot over the past 15 years. One thing is for certain—nothing stays the same. The biggest take away is that economic development needs a lot of explaining in our community.”

Forward Cody hopes that by increasing transparency there will be less confusion over its involvement in the local community and economy.