Cars were lined up for hours before the pantry opened, and Park County officials and volunteers ensure everyone who showed up went home with some food security.

After examining several areas in Wyoming, the Wyoming Food Bank of the Rockies determined Cody and Park County were areas most in need of additional food at this time. Other food pantries are being held in Casper, Gillette, and Laramie this March.

Word of the one-day pantry got out and the community responded.

“We had cars lining up as early as 7:45 a.m. this morning,” says Jack Tatum, director of the Park County Office of Homeland Security. The pantry didn’t officially open until 11 a.m.

By 11:30 a.m., a line of vehicles doubled back three times across the Cody Stampede Rodeo Grounds parking lot. Lines reached as far back as Walmart and Riverside Cemetery. 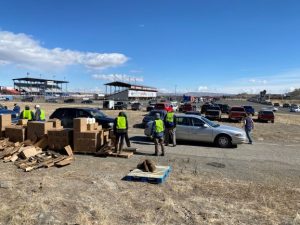 Over 250 vehicles received boxes of food and a carton of milk within the first hour.

While there was no anticipation of how many people would show up, everyone was prepared. The Wyoming Food Bank of the Rockies delivered 22 pallets of fresh produce, dairy, and meat – enough for 900 vehicles.

The Park County Office of Homeland Security was distributing the food with the assistance of the volunteers of Cody’s Community Emergency Response Team. Other Park County leaders were also on the scene, like Public Health Nurse Bill Crampton and CEO of Forward Cody James Klessens.

Lines were moving quickly. Drivers pulled up – trunks open – to receive their boxes of fresh food. As quickly as they stopped, drivers were heading out once again.

The Wyoming Food Bank of the Rockies has been busy during the pandemic. Several food drives have been held in Park County and across Wyoming at a time when many Wyomingites were struggling with work and income.

Tatum anticipated that they could reach as many as 900 vehicles during the three-hour pantry. But they planned for the maximum contingency.

“We’re making sure everybody goes home with something,” Tatum said. 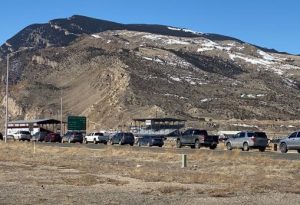 The final count came to 702 cars by the end of the pop-up pantry. Extra boxes went to Loaves and Fishes in Powell while CERT volunteers took some boxes to those who were in need but couldn’t make the distribution.

Tatum celebrates this pantry as “a huge community effort.” He applauds all the organizations and volunteers for their efforts and assistance. 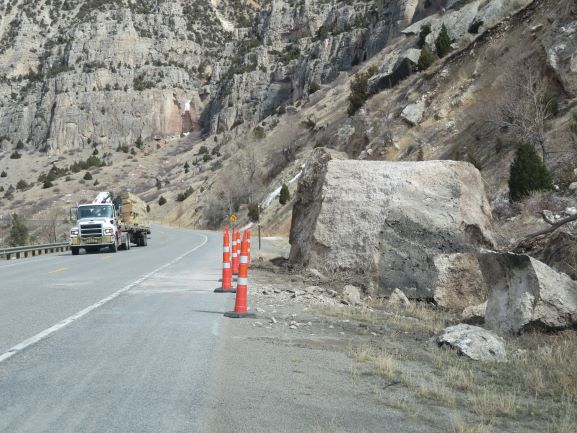