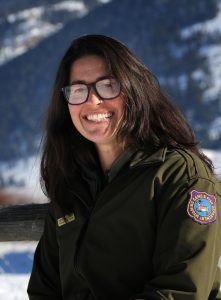 Stewart began her career with the Game and Fish Department in 2014 as an Elk Brucellosis GIS Specialist in Pinedale, capturing and marking elk to map their calving areas and seasonal movements to prevent the transmission of brucellosis to livestock. In 2016, Cheyenne began working as a Habitat Biologist also in Pinedale, designing and implementing a variety of landscape-scale wildlife habitat improvement projects in southwestern Wyoming.

In 2017, Stewart was selected to serve as the Wildlife Biologist in Buffalo where she would monitor big game populations, design hunting seasons and provide wildlife considerations on a variety of regional planning and development projects. While in that role, Stewart was also instrumental in launching a new mule deer research project in the southern Bighorn Mountains. In 2019, Stewart was promoted to the Wildlife Management Coordinator position for the Sheridan Region.

Prior to working for the Game and Fish Department, Stewart was involved in an array of wildlife biologist positions including working with arctic wolves on Ellesmere Island, gray wolves in Yellowstone National Park, Sonoran pronghorn and Mexican gray wolves in Arizona, mountain lions in western Colorado and grizzly bears in Alberta Canada.

Cheyenne is excited to be back working with wildlife in the Greater Yellowstone Ecosystem and looks forward to getting acquainted with the Game and Fish Department’s many partners in the Jackson community. Cheyenne will be living and recreating in the Jackson area with her husband Kole and their two young children Isa and Cooper.