After the theft of another traffic sign, the Park County Sheriff says this “harmless prank” can have serious consequences – misdemeanors, injuries, and deaths.

The Park County Sheriff’s Office confirmed that they’ve received another call of multiple stolen traffic signs. This is the latest in a series of similar sign thefts reported throughout 2020.

A partial list of the stolen signs includes STOP signs, CURVE AHEAD signs, and road names signs. In May 2020, the UXU Ranch sign was stolen from its location on the North Fork Highway in an incident that may or may not be related to the ongoing wave of sign thefts.

Road signs are not frivolously placed –  their locations are specifically chosen due to hazards in the areas that need to be indicated for vehicles and drivers.

This isn’t a victimless crime for local law enforcement, and it’s clear that patience is running thin. In a statement released yesterday, Park County Sheriff Scott Steward “laid out the law” on the consequences of these thefts.

“It may seem like a harmless prank, but the consequences of these actions can be far-reaching,” the sheriff said. “Traffic signs are there for a reason, to help protect the drivers on the road.”

Specific incidents were cited as the unintended but real consequences of missing signage:

The Sheriff’s Office is investigating all the sign thefts, at their own expense. If they find the guilty persons, they will be prosecuted.

“Significant fines” are just the beginning . . .

Park County Attorney Bryan Skoric search Wyoming laws and laid out some of the possible charges facing sign thieves if the missing sign is a factor in a serious incident:

Any of these charges can be added to someone found guilty of sign theft – especially if there is an injury or death.

The Park County Sheriff’s Office also offers a “Tip Line” that can be utilized at https://www.parkcountysheriff.net/tip-line/. The “Tip Line” is not monitored 24 hours a day and should never be used in an emergency. 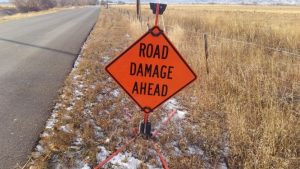