Written by Associated Press on October 11, 2022

CAPE CANAVERAL, Fla. (AP) — A spacecraft that plowed into a small, harmless asteroid millions of miles away succeeded in shifting its orbit, NASA said Tuesday in announcing the results of its save-the-world test. 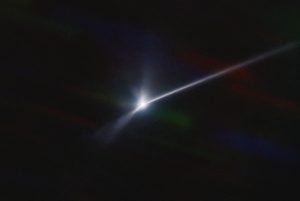 This image made available by NOIRLab shows a plume of dust and debris blasted from the surface of the asteroid Dimorphos by NASA’s DART spacecraft after it impacted on Sept. 26, 2022, captured by the U.S. National Science Foundation’s NOIRLab’s SOAR telescope in Chile. The expanding, comet-like tail is more than 6,000 miles (10,000 kilometers) long. (Teddy Kareta, Matthew Knight/NOIRLab via AP)

The space agency attempted the test two weeks ago to see if in the future a killer rock could be nudged out of Earth’s way.

“This mission shows that NASA is trying to be ready for whatever the universe throws at us,” NASA Administrator Bill Nelson said during a briefing at the space agency’s headquarters in Washington. 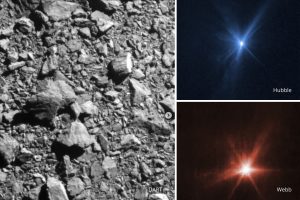 This combination of images provided by NASA shows three different views of the DART spacecraft impact on the asteroid Dimorphos on Monday, Sept. 26, 2022. At left is the view from a forward camera on DART, upper right the Hubble Space Telescope and lower right the James Webb Space Telescope. (NASA via AP)

The Dart spacecraft carved a crater into the asteroid Dimorphos on Sept. 26, hurling debris out into space and creating a cometlike trail of dust and rubble stretching several thousand miles (kilometers). It took consecutive nights of telescope observations from Chile and South Africa to determine how much the impact altered the path of the 525-foot (160-meter) asteroid around its companion, a much bigger space rock.

Before the impact, the moonlet took 11 hours and 55 minutes to circle its parent asteroid. Scientists had anticipated shaving off 10 minutes, but Nelson said the impact shortened the asteroid’s orbit by 32 minutes. 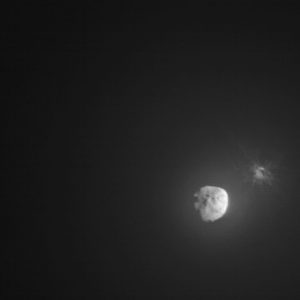 In this image made available by NASA, debris ejects from the asteroid Dimorphos, right, a few minutes after the intentional collision of NASA’s Double Asteroid Redirection Test (DART) mission on Sept. 26, 2022, captured by the nearby Italian Space Agency’s LICIACube. On Tuesday, Oct. 5, 2022l, NASA said the spacecraft succeeded in shifting its orbit. (ASI/NASA via AP)

“Let’s all just kind of take a moment to soak this in … for the first time ever, humanity has changed the orbit” of a celestial body, noted Lori Glaze, NASA’s director of planetary science.

Apollo astronaut Rusty Schweickart, a co-founder of the nonprofit B612 Foundation, dedicated to protecting Earth from asteroid strikes, said he’s “clearly delighted, no question about that” by the results and the attention the mission has brought to asteroid deflection.

The team’s scientists said the amount of debris apparently played a role in the outcome. The impact may also have left Dimorphos wobbling a bit, said NASA program scientist Tom Statler. That may affect the orbit, but it will never go back to its original location, he noted. 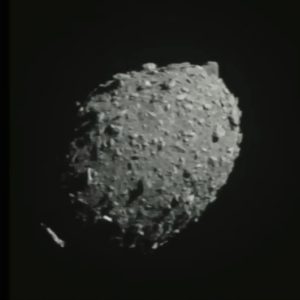 In this image made from a NASA livestream and taken from the Double Asteroid Redirection Test spacecraft, asteroid Dimorphos is seen as the spacecraft flies toward it, Monday, Sept. 26, 2022. (ASI/NASA via AP)

Neither asteroid posed a threat to Earth — and still don’t as they continue their journey around the sun. That’s why scientists picked the pair for this all-important dress rehearsal.

Planetary defense experts prefer nudging a threatening asteroid or comet out of the way, given years or even decades of lead time, rather than blowing it up and creating multiple pieces that could rain down on Earth.

“We really need to also have that warning time for a technique like this to be effective,” said mission leader Nancy Chabot of Johns Hopkins University’s Applied Physics Laboratory, which built the spacecraft and managed the $325 million mission.

Launched last year, the vending machine-size Dart — short for Double Asteroid Redirection Test — was destroyed when it slammed into the asteroid 7 million miles (11 million kilometers) away at 14,000 mph (22,500 kph).

“This is huge feat, not only in achieving the first step in possibly being able to protect ourselves from future asteroid impacts,” but also for the amount of images and data collected internationally, Daniel Brown, an astronomer at Nottingham Trent University in England, said via email.

Brown also said that it’s “particularly exciting” that the debris tail can be seen by amateur skygazers with medium-size telescopes.

Team scientists cautioned more work is needed to not only identify more of the countless space rocks out there, but to ascertain their makeup — some are solid, while others are rubble piles. Scouting missions might be needed, for instance, before launching impactors to deflect the orbits.

“We should not be too eager to say one test on one asteroid tells us exactly how every other asteroid would behave in a similar situation,” Statler said.

Nonetheless, he and others are rejoicing over this first effort.

“We’ve been imagining this for years and to have it finally be real is really quite a thrill,” he said. 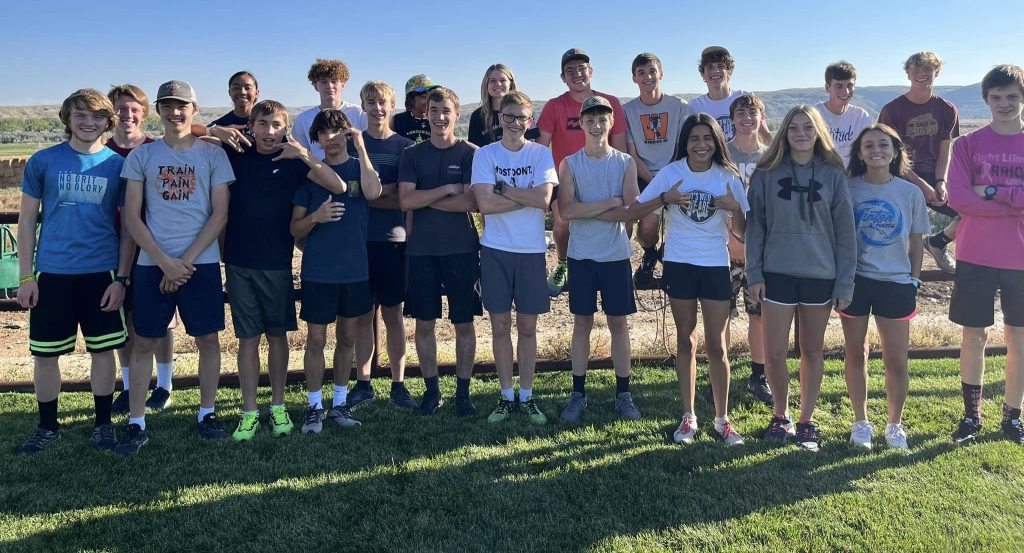 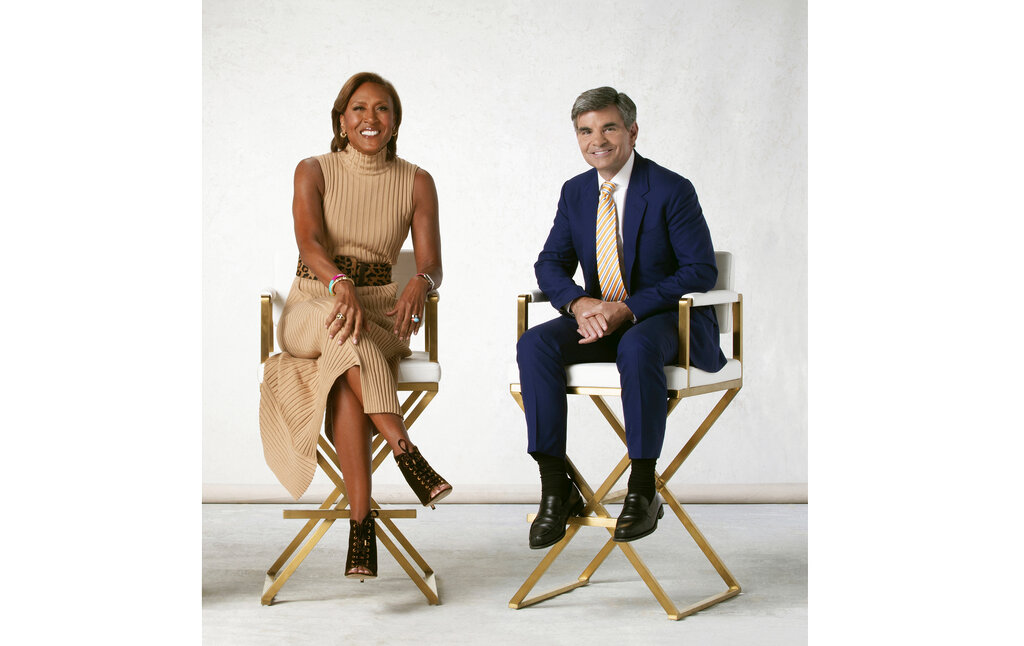