A collaborative study by the U.S. Geological Survey (USGS) and the University of Wyoming determined mule deer miss out on forage when energy development disrupts their migration corridors.

“Mule deer are known for how precisely they match their movements with spring green-up, so this result was particularly striking,” says lead author Ellen Aikens, a UW Ph.D. graduate now with the USGS South Dakota Cooperative Fish and Wildlife Research Unit. “The gas wells caused them to let the best food of the year slip away from them.”

The paper “Industrial energy development decouples ungulate migration from the green wave” has been published in the journal Nature Ecology & Evolution.

Each spring, in the American West, mule deer migrate to follow the green-up of plants as they sprout at different elevations. Biologists term this “surfing the green wave.” Mule deer rely on this surfing behavior to find the youngest and most nutritious plants that allow them to recover from winter and put on fat for the next lean season. 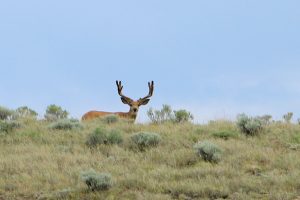 The new study shows how development disrupts deer movements. Because of this, deer lose their ability to match their foraging with the wave of the most-nutritious springtime plants.

The 14-year study followed a herd of migratory mule deer that winters in sagebrush basins and summers in the Sierra Madre Mountains, about 15 miles southwest of Rawlins.

Over the study period, dozens of new wells were drilled for coalbed methane extraction in the middle of an existing mule deer corridor. The long-term movement data allowed for a before-after comparison of the effects of expanding development on mule deer movements.

Previous research by the team had detailed how mule deer behaviors shifted in response to the new gas wells, causing them to detour, speed through the well pads, and stop less to forage. For the new study, the team analyzed the deer movements — alongside daily changes in spring green-up estimated from remote satellite imagery — to measure how well the deer surfed along the corridor, upstream and downstream from the energy development, and over the 14-year period.

“The deer movements in response to the gas field were unmistakable,” Aikens says.

As development intensity increased over time, the deer began to “hold up” when they reached the natural gas wells. They paused their spring migration and let the wave of green vegetation pass them by, becoming decoupled from their best food resources at a crucial time of the year.

Overall, the wells resulted in a 38.65 percent reduction in green-wave surfing over time. It’s as if deer showed up for a moving feast, only to stumble, balk and let the best food go stale. 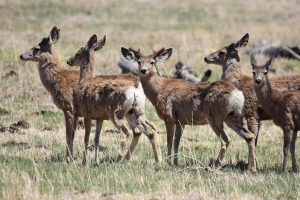 A 14-year study on a mule deer herd south of Rawlins has found that the herd’s ability to track springtime forage — which supports antler growth, nursing of offspring, and abundance — declined by 38.65 percent when energy development occurred in its migration corridor.

There was no evidence that mule deer acclimatized to development and associated increases in human presence, truck traffic, and noise. Small- and large-scale developments altered green-wave surfing behavior to a similar degree.

The study will help wildlife managers understand how intact corridors must be to retain their ecological functionality. In this case, deer were still able to move through the gas field, but a vital function of the migration corridor — to track the green wave all along the route at the ideal stage of plant growth — was lost.

The finding is important because if migratory ungulates can’t maximize foraging, it will reduce the overall benefit of migration. Natural movement following food resource is the most profitable strategy for ungulates as diverse as mule deer in Wyoming, caribou in the Arctic, or antelope in Africa.

The study is a cautionary tale. Development within corridors can reduce the benefits of migratory behavior, ultimately resulting in loss of migration and population declines on highly impacted landscapes.

The researchers hope the findings can help provide a way forward for sustaining mule deer migrations.

“The impact is quite clear, but also points to conservation solutions that will allow us to retain viable migrations for generations to come,” says co-author Matt Kauffman of the USGS Wyoming Cooperative Fish and Wildlife Research Unit at UW. “Once migrations have been mapped, development can be planned in a way that minimizes the disruptions to migrating herds, whether in Wyoming, the American West or wherever landscapes are rapidly changing.”

Additional co-authors of the paper include Teal Wyckoff of The Nature Conservancy and Hall Sawyer of Western EcoSystems Technology Inc.

The work is timely, as numerous state and federal initiatives have been implemented over the last five years in the U.S. to map migration corridors and reduce impacts. For example, state wildlife managers in Wyoming have long sought to map and conserve migration corridors, now guided by state policy. Globally, efforts are underway to map the world’s ungulate migrations for use in conservation and development planning.

“This new research provides the most convincing case, so far, that efforts to minimize development within migration corridors will benefit their long-term persistence amid changing landscapes,” Kauffman says.

Warriors Lose To Buffalo At Home 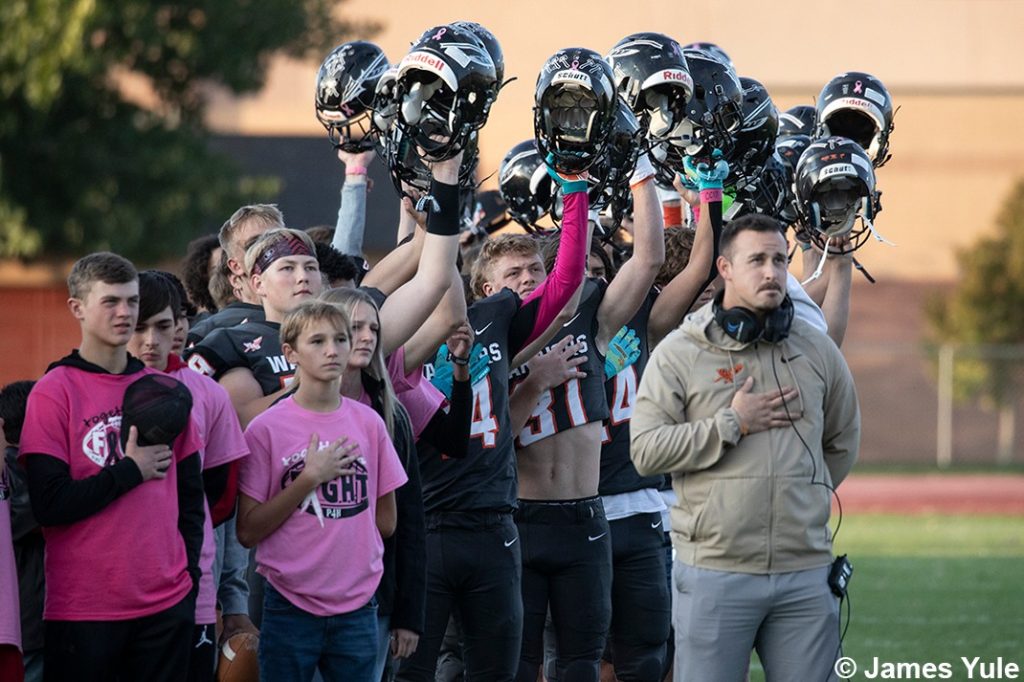 Quake Hockey Swept by Gillette in Return to Riley Arena