BILLINGS,  . (AP) — A Billings woman faces a homicide charge in the shooting death of a Wyoming man whose body was found in his van after it crashed during a law enforcement pursuit in Billings last week.

Kristy Lynn Chavez, 31, was charged Tuesday with deliberate homicide by accountability for the death of Dennis Gresham, 33, of Sheridan, Wyoming.

She appeared in Justice Court, where Justice Jeanne Walker set her bond at $500,000. Chavez did not enter a plea and did not have an attorney.

The case began when officers responded Friday to a report of a suspicious vehicle at a business in Laurel — a van that was covered by a tarp. Officers spoke with Michael Lee McClure, who was near the van. A woman was in the front passenger seat, court records said.

While the officer was confirming McClure’s identity, he drove off in the van. The pursuit ended in Billings when the van crashed in a west-end neighborhood.

McClure continued to run and tried to enter several houses before barricading himself in the attic of a house. Authorities weren’t able to successfully negotiate or use chemicals to get McClure to surrender during an hourslong standoff, police said.

McClure pointed a handgun at police officers and deputies, officials said, and officers shot him. However, an autopsy determined McClure died of a self-inflicted gunshot wound, police told The Billings Gazette on Tuesday.

“The rounds that struck McClure by law enforcement were not fatal,” police said in a statement.

Further investigation found that McClure and Chavez had approached Gresham at a campground near Billings. Chavez told officers they were both armed and that Gresham had declined their requests for cigarettes and a ride.

McClure began fighting with Gresham and Chavez said she got into his van and started driving away. She soon heard several gunshots and believed Gresham had been killed, she told investigators.

Officials have said McClure was a suspect in an April 19 case in which shots were fired through the door of an apartment in Billings. One of the rounds struck a woman in the head. She survived the shooting.

Wyoming Game and Fish To Break Ground on Cody Office 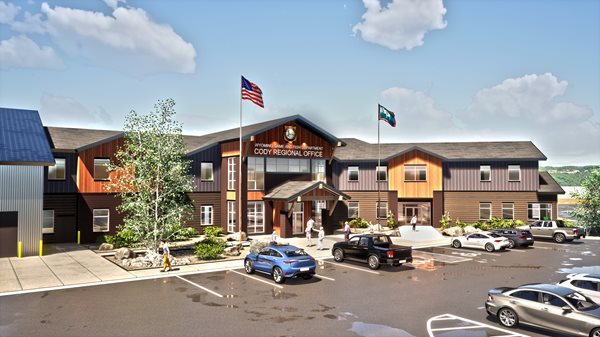