After thousands of boat inspections, Wyoming remains free of aquatic invasive species after Summer 2021 – but not without a few close calls for Wyoming waters.

As more states and waters turn up with aquatic invasive species (A.I.S.), the threat to Wyoming continues to swell. Curly pondweed, Asian carp, and zebra and quagga mussels have yet to appear in the state, but it’s getting harder to keep them out.

Wyoming Game and Fish A.I.S. checkstations are the first line of defense against invasives entering the state or being spread between Wyoming’s waters. State law requires all watercraft – transported into the state from March 1 through November 30 – undergo a mandatory inspection by an authorized inspector before launching.

“Checkstations were extremely busy in 2020, and we stayed that way in 2021,” said Josh Leonard, Game and Fish A.I.S. coordinator. “It was another record-breaking year, but this time it was because we intercepted more risk.”

Over the summer season, Wyoming Game and Fish Department watercraft checkstations inspected more than 68,000 boats and decontaminated 924 boats – record highs for the state.

Wyoming Game and Fish did the highest number of decontaminations since the A.I.S. program was established in 2010. It’s also the first-time live mussels have been found on boats at Wyoming checkstations. 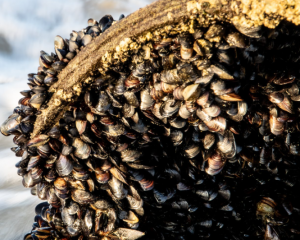 It’s a real threat – several “near misses” were reported in 2021, one that could’ve let mussels loose in Yellowstone National Park.

In April, zebra mussels were found in moss balls sold in several Wyoming pet stores. Thankfully, the threat was quickly discovered, and the cold spring prevented the mussels from reproducing. And there was another positive.

“The outreach around moss balls and zebra mussels created a lot more awareness about the threat of A.I.S. to our state,” Leonard said.

Invasive mussels are one of the most destructive forms of A.I.S., and it is nearly impossible to eradicate mussels once they are established in natural water. While the state was the most vulnerable it’s ever been to a mussel infestation, Wyoming remains free of zebra and quagga mussels.

Game and Fish monitors for mussels and other invasives by sampling 20 bodies of water twice per year and an additional 50 waters once per year. This year, municipal water testing was also added to that list to make sure mussels didn’t find their way into pipes from aquariums.

The department also finalized rapid response plans in 2021 to respond if mussels are ever found in the state’s 23 most vulnerable natural waters.

Ultimately, it’s up to Wyomingites to ensure our pristine waters are not invaded by dangerous species.

The threat cannot be understated, and the potential of contamination is higher than ever.

“There’s still a place in the United States that doesn’t have mussels — it’s Wyoming — and we’re doing all we can to keep it that way, with inspectors working very hard to keep A.I.S. out,” Leonard said. “Wyoming has wonderful, diverse water resources, and we need to protect them.”