Blizzard conditions for Wyoming are inbound, as a long summer suddenly transitions into a harsh fall – with at least a foot of snow – in the Bighorn Basin.

Winter weather is pushing its way into the Bighorn Basin this week. After summer conditions persisted into the first week of October, autumn will be establishing itself with a vengeance at the beginning of this week.

The National Weather Service in Riverton issued a Winter Storm Warning for a significant portion of the Bighorn Basin until 11 p.m. Tuesday evening. It’s part of an immense winter storm that will smother Wyoming, Montana, and Colorado and threatens to dump several feet of snow across all three states.

AccuWeather reports that the following few days will not be a small sample of winter – this will be the first significant snowstorm of the season.

“Into the day on Monday, the storm will continue to intensify, and snowfall intensity will begin to pick up across the northern Rockies. Travel conditions across the mountainous terrain of Idaho, western Montana, and northwestern Wyoming can quickly become hazardous as snowfall rates of an inch or more per hour can lead to whiteout conditions.”

This description will come to fruition in Cody. AccuWeather cites “the scenic areas in and around Yellowstone National Park” as being particularly hammered by this storm. 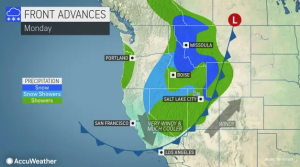 These weather forecasts mean travel will quickly become difficult – if not “impossible” throughout the Bighorn Basin.

Things will only get worse on Tuesday. AccuWeather describes Tuesday’s traffic conditions “as extremely difficult, if not impossible” due to the constant snowfall.

“Snow is expected to continue through the night and into the morning hours on Tuesday, likely making travel extremely difficult, if not impossible, into the day on Tuesday as well.

“The snow and much colder conditions will continue to filter south and east throughout the Rockies Monday night,” according to AccuWeather’s report. 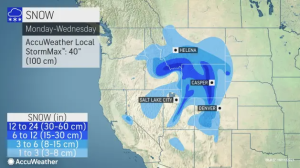 Overall, as much as 40 inches of snow is possible at the higher elevations of Montana and Colorado. And at least that much is anticipated in Wyoming.

“Some of the harshest winter conditions from this storm are expected to occur (in Wyoming.) Some of the heaviest snowfall accumulations are expected to reside somewhere near Wyoming’s Interstate 25 and U.S. Highways 16 and 26 corridors, where 1-2 feet of snow and an AccuWeather Local StormMax™ of 40 inches are possible.”

Forecasts place the heaviest snow in the north-central part of Wyoming, specifically Buffalo and Sheridan. However, no part of Wyoming will be unaffected.

This snow will be accompanied by “hurricane-force” winds, mainly on Tuesday.

Once again, Eastern and Central Wyoming are expected to get the worst of the winds, but the Bighorn Basin will still endure wind gusts up to 35 miles per hour.

Cody’s forecast calls for rain and snow showers Monday, transitioning into snow showers Monday night into Tuesday. Overall, snow accumulation is estimated to be anywhere from seven to thirteen inches of snow over the next two days.