Cody has their Eyes on the Prize

We are just one day away from the Cody Broncs stepping foot onto Spike Vannoy Stadium for Wyoming’s Class 3A State Championship Football game. A lot of blood, sweat and tears have propelled the Broncs to this moment as they get set to host the Jackson Broncs for the State Title. It’s a match-up of the best-of-the best in the Cowboy State where only one will remain supreme. With the Title game looming I caught up with head coach Matt McFadden to not only breakdown this match-up but talk the season as a whole. Coach McFadden on just how special it is to host this game.

“High School Football’s about community. Our community’s awesome and our fans and our parents, our town, administrators and the students. There’s a piece of it that we love to give back and we play really well in front of our fans and we want to give back to the town and give them one more game and celebrate together. To us it’s really important. It’s comforting to be at home. You’re used to the locker room. They want to play for their peers. This is a sport with a lot of fans. They want to be celebrated and they want to go out there and do it for the community. I think they’re extremely excited for it. I know I am.”

With this big of a game upcoming and a young roster coach talks about the importance of keeping a consistent routine and making things as normal as possible.

“It’s not a normal week cause it’s a championship week and you’re hosting a state championship. So there’s things you can’t control with that but there are things you can: the way you practice, the times you practice and how long you practice. All those things, we’ve been doing those, you know, for two and a half months now and we’ll continue to do those. We try to keep that routine very similar, the same type of stuff. I think just kind of keeps the kids at ease.”

The last time these two teams met was the final game of the regular season. Cody defeated Jackson 48-6. Coach McFadden on the message to his team at practice this week.

“The emphasis this week is just stay focused. It’s execution wins. There’s tons of noise and external things to take away from your focus. Bottom line is execution wins football games. That’s why we’ve got to this point, is we’ve executed and that’s why we’ll move on, will be due to our execution or lack there of it. Then as a side note it’s been, just enjoy the moment. You know, it doesn’t come around very often and you may never have another state championship at Cody. You just never know and you never know when your next opportunity will be. So just enjoy the moment, look around, breathe it in cause you’re making memories.”

As for the match-up itself. Jackson runs most of the offense through their dynamic quarterback and running back. Is the key to stopping Jackson as simple as stopping those two?

“Yeah, it’s explosive plays. They’ve got a really good receiver. Douglas did a pretty good job with him but they got a big tall receiver and a big tight end but it comes down to explosive plays and most of those explosive plays do go through the quarterback and the tailback in some fashion. They’ve got some offensive threats that are big. They’re a big play offense. So to us it’s containing those big plays. They’re going to get a few, don’t make them fatal and we got to rally to the ball and we’ve got to tackle is space. It’s stopping those two. Those are two of their big studs. Ball definitely runs through them.”

In big games it’s all about the guys that got you to this point, that will ultimately win you the championship. For Cody that’s their Senior class.

That’s Nic Talich, that’s Cody Phillips, it’s Caleb, it’s Devyn. It’s those guys, it’s the guys that have really got us here. It’s Reese and Brice and Keaton Stone. They got us here and they’re going to move us on. We don’t go away from our Tigers and those are the guys, that to me, that have to play well in a big game and will. They’re the ones with the most on the line and have prepared the hardest. For us, it’s not a factor of a new kid stepping up but it’s the reliable and that they continue to be reliable.”

The Cody Broncs host the Jackson Broncs for the Class 3A State Championship game at Spike Vannoy Stadium on Saturday with kick-off to get underway at 12 noon. Catch all the live play-by-play action on the voice of Cody Sports KODI AM 1400 and 96.7FM. 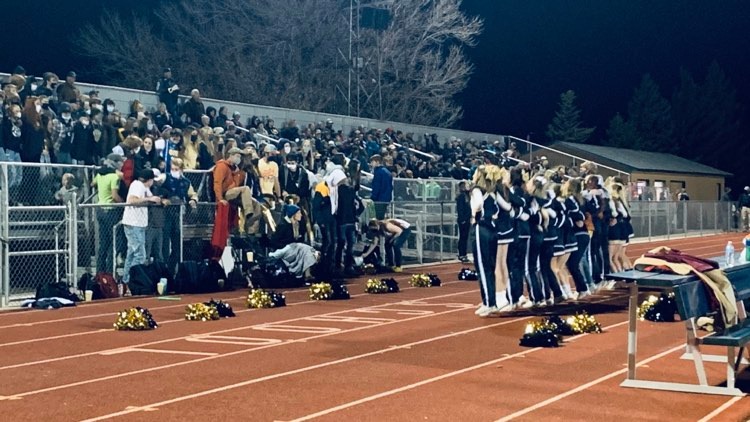 Possible Face Mask Mandate in Wyo. To Be Discussed On KODI