Dave Walsh, Wyoming Hall of Fame Broadcaster, Retires & Reece Monaco Takes Over as the Voice of the Cowboys

Yesterday, University of Wyoming Athletics and LEARFIELD announced the retirement of Dave Walsh. For the past 38 years, Wyoming Cowboy football and basketball fans have turned on their radios to hear Walsh’s iconic voice and play-by-plays. 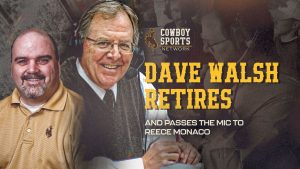 Courtesy of University of Wyoming Athletics

An era began in 1984 is coming to an end as Walsh is retiring as the “Voice of the Cowboys.” Fortunately, however, Wyoming fans will be able to hear another familiar voice as Walsh steps down. Reece Monaco will take over as the Voice of the Cowboys for the play-by-play duties for Cowboy football and basketball.

Previously, only three other individuals have held the title of “Voice of the Cowboy” on a consistent basis. From 1947 to 1985, Larry Birleffi called play-by-play action for Cowboys. Walsh had been originally hired by broadcasting legend and Wyoming alumnus Curt Gowdy in 1984. Walsh started his career as the “color analyst” for Cowboy football games – a color analyst is someone who assists with commentary for the game.

In 1985, Walsh took over as the play-by-play voice of the Cowboys and continued in that role until the 2021 season. In 2020, Monaco presided as chair for play-by-play announcing for Cowboy Basketball, while Walsh continued to call Wyoming football. Now Monaco has become the third person to hold the full-time title of “Voice of the Cowboys” for both sports.

“Seeing Dave (Walsh) step away completely is difficult for someone like me who grew up listening to Dave tell the great stories of Wyoming football and basketball,” Tom Burman, University of Wyoming Athletics Director, says.  “On behalf of our athletics department and as a fan myself, I want to thank Dave for his outstanding work for the past 38 years.  He has been a great ambassador of UW Athletics, and we will be forever grateful.

“With that said, we look forward to seeing Reece (Monaco) develop as the new voice of Wyoming Cowboy football and basketball.  I believe he has a very, very bright future.”

“We can’t thank Dave (Walsh) enough for his long-time commitment to the Cowboys,” Brad Poe, General Manager of Wyoming Sports Properties (LEARFIELD’s locally based team), added.  “Dave is a Wyoming legend and will be remembered in homes all over Wyoming for many years to come.  His voice will carry on in the hearts of Cowboy fans forever.

“It has been a privilege to be the ‘Voice of the Cowboys’ for 38 years,” Walsh states.  “I truly feel like I’ve had the best play-by-play job in America.  The people of Wyoming have been fantastic to me and my family.  I feel truly blessed to have enjoyed so many wonderful relationships with fans, players, coaches and athletic support staff through the years, as well as sharing great relationships with other broadcasters around our state and around the country.  I can’t thank enough all the network staff who I’ve worked with from the time Curt Gowdy first hired me, to K2 Radio, to Montgomery Broadcasting and now with LEARFIELD.  They all helped make my job easier.  It made it even more special to share the broadcast booth with my good friend Kevin McKinney for all these years.  We had fun working together, and I think we did some good radio through the years.  I hope we brought enjoyment to those listening.  There will, no doubt, be many things I will miss about broadcasting Cowboy games, but I feel like this is the right time for me to step away.  I walk away taking with me so many wonderful memories.  Thanks to the people of Wyoming and all the best to Reece (Monaco), who has already proven what an outstanding broadcaster he is.”

“I am incredibly honored,” Monaco says.  “My first experience with Wyoming football and basketball was listening to Dave Walsh and Kevin McKinney.  Dave is and will always be the ‘Voice of the Cowboys’ to an entire generation of Cowboys fans and will be greatly missed by me and the fans who have grown to love his amazing voice.  Dave is a friend and mentor, and to say I have big shoes to fill is an understatement.  With so many outstanding sportscasters in Wyoming, I am thrilled that Tom Burman and Brad Poe have the faith in me to step into this role and bring Wyoming football and basketball to Cowboys fans in Wyoming and around the country.”

Walsh has been selected nine times as the Wyoming Sportscaster of the Year based on the input of his peers at the National Association of Sportswriters and Sportscasters. As a recent press release explains, “He was inducted into the Wyoming Association of Broadcasters (WAB) Hall of Fame in the summer of 2015 and was inducted into the University of Wyoming Intercollegiate Athletics Hall of Fame in the fall of 2016.”

In 2020, the National Football Foundation (NFF) named Walsh as the recipient of the Chris Schenkel Award, which has been presented annually since 1996 to individuals with long, distinguished careers in broadcasting college football (and to individuals who have direct ties to a specific university). He is the 26th recipient of this national award. The award is named in honor of ABC Sports broadcaster Schenkel who was the original recipient of the award in 1996. Over his 38-year career, Walsh worked with the coaching staff of nine football teams and eight men’s basketball teams. He described many of many memorable events in Wyoming Athletics history using his legendary phrase, “The Score, Oh the Score.” That phrase will, according to the University of Wyoming Athletics, “live forever in the annals of Cowboy Football and Basketball.”

Monaco will take over for Walsh with an already impressive broadcasting career in the state of Wyoming. Monaco has been selected by his peers at the National Association of Sportswriters and Sportscasters as the Wyoming “Sportscaster of the Year” five times. His affiliation with the University of Wyoming began as a student in the early 1990s. A long-time sportscaster and newscaster for KFBC Radio in Cheyenne, Wyoming – Monaco was the play-by-play voice of Cowgirl basketball for 19 seasons before stepping into the role of Voice of Cowboy Basketball throughout the 2020-21 season. He has also served as a sideline reporter for Cowboy football for the past 10 years.

Kevin McKinney has assisted all three play-by-play announces with color commentary. McKinney first served as the color analyst for Cowboy Basketball during the 1973-74 season where he continues his work today. The upcoming 2022-23 basketball season will be McKinney’s 50th season providing color commentary. Since 1996, he has also provided color analysis for Cowboy football games, and he will continue in that role during 2022. McKinney was inducted, along with Walsh, into the Wyoming Association of Broadcasters (WAB) Hall of Fame in the summer of 2015. In 2013, McKinney was inducted into the University of Wyoming Intercollegiate Athletics Hall of Fame. He was named Wyoming’s Sportscaster of the Year in 2000 and in 2011 he was honored with a lifetime achievement award from the Wyoming State Athletics Hall of Fame.

“I was always impressed with Dave’s preparation, his professionalism, his unique ability to paint a picture with his words and phrases, and his passion for the business and the Cowboys,” McKinney says.  “He taught me a ton about sports broadcasting.  He always appreciated and respected his role as “Voice of the Cowboys”.  His voice and “The Score, Oh the Score”, will forever be a special piece of Wyoming athletic tradition.  I will miss him tremendously.  At the same time,  I’m anxious to begin the next chapter with Reece, who not only has paid his dues to receive this opportunity but who understands the importance of his role to the University and the State of Wyoming.”

Erick Pauley will take over as sideline reported for Cowboy football games replacing Monaco. Pauley is currently the Vice President of Operations for The Radio Network in Green River, Wyoming. Mr. Pauley, like Walsh, Monaco, and McKinney, is a former Wyoming Sportscaster of the Year (2018) recipient as selected by his peers at the National Association of Sportswriters and Sportscasters. Pauley, a former football letterman at the University of Wyoming (where he played defensive line), brings a wealth of experience to the Cowboy Sports Network. A native of Green River, Wyoming, Pauley was a standout prep athlete in the state and has been a sportscaster and newscaster for many years. 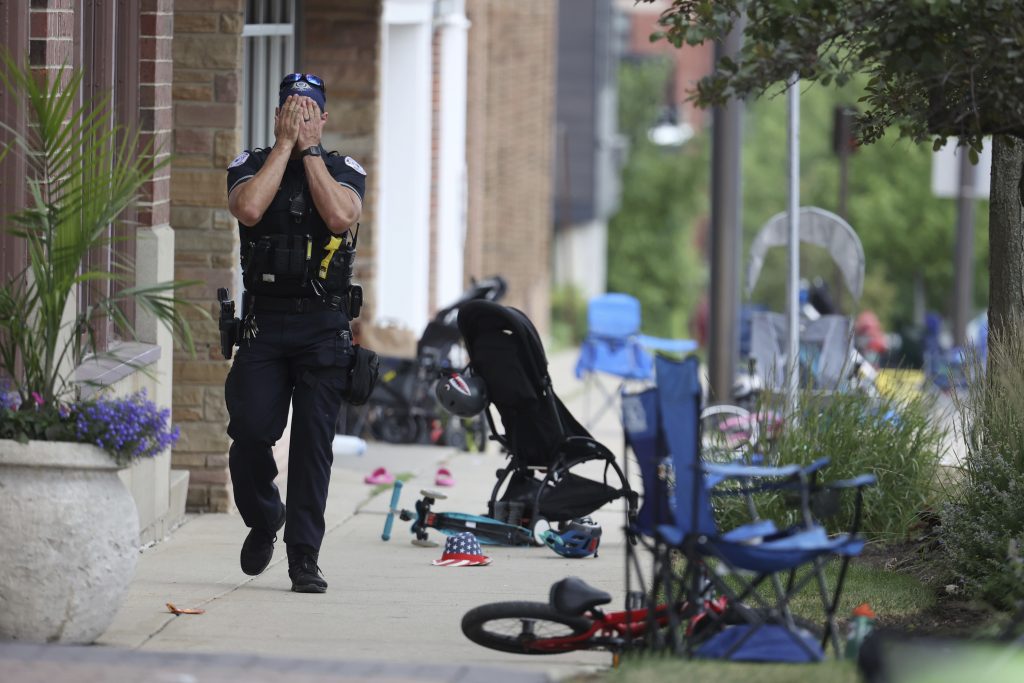 Yellowstone Regional Airport is Taking Off! 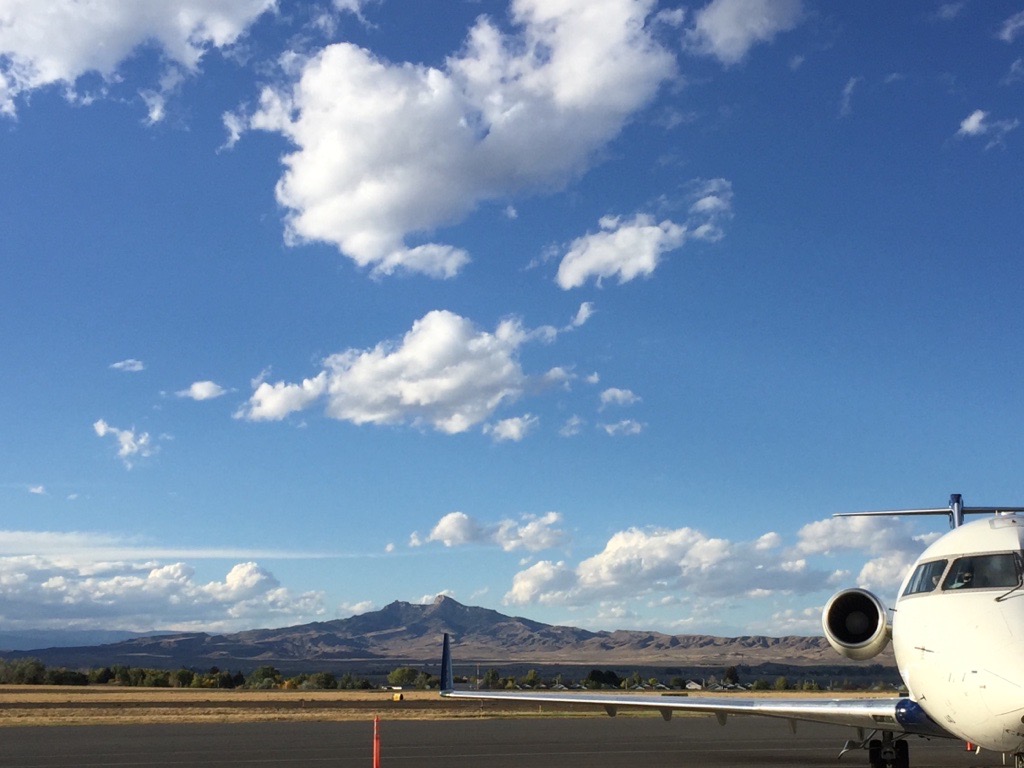