Governor Candidates on the Issues

From the Endow Initiative to Education, the six Republican candidates for Governor answered questions about their priorities and views on a wide range issues facing the Cowboy State at a forum yesterday evening at the Buffalo Bill Center of the West in Cody. 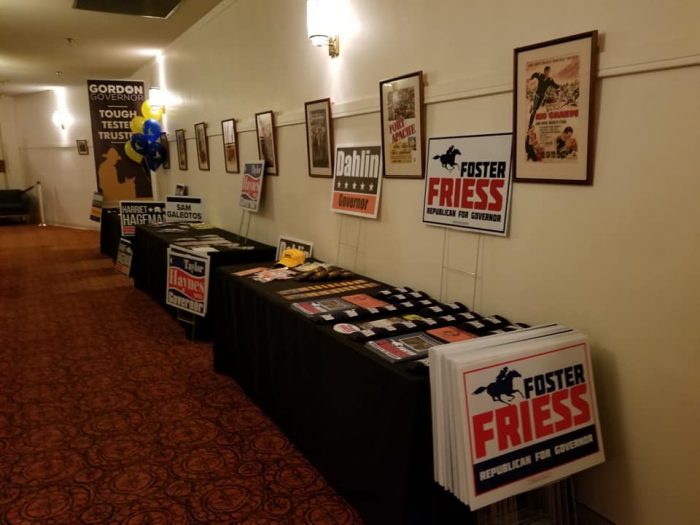 The candidates were asked questions by moderator Darian Dudrick during the forum, which was live streamed on the internet and broadcast on KODI yesterday evening beginning at 6 p.m. The questions had been submitted by citizens, and each candidate was given two minutes to explain their views on topics such as tourism, the future of Wyoming’s economy, access to public lands, and social issues.
Mark Gordon is currently the state’s treasurer, and he says that his experience in three major sectors of Wyoming’s economy – tourism, energy and agriculture – are just part of the reason why he says he’s the best candidate for Wyoming’s next Governor.
Foster Friess has been named by Forbes Magazine as one of the top ten managers of this generation. Friess, a businessman and philanthropist, cites his experience in creating leaders as a reason he should be considered.
This isn’t the first run for governor that Dr. Taylor Haynes has made, appearing on the ballots in 2010 and 2014. Haynes says that his education and background should be considered in this year’s election.
Sam Galeotos, who is currently the chairman of the board for a technology company in Cheyenne, says that his strength is in building businesses that are ready to take on a rapidly changing, global economy.
Bill Dahlin, a businessman from Sheridan with experience in the energy industry, also pointed out the importance of strengthening the economy.
Harriet Hageman told the capacity crowd that if elected, she pledged to gather together experts in all aspects of society from the economic and education sectors to mental health and veterans issues, that would be part of her administration and shape the decisions made at the state level.
Voters will be able to select from one of these six candidates during the state’s primary election on August 21st.

Cody School Board Candidates Make Their Case on KODI