Some 50 million bison roaming across the Great Plains once served as the backbone for thriving western economies, before European settlers brought herds to the brink of extinction. 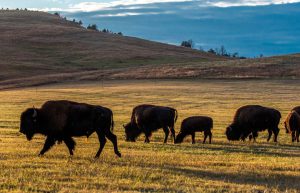 Jason Baldes, executive director of the Wind River Tribal Buffalo Initiative and an Eastern Shoshone tribal member, is working to bring buffalo back onto tribal lands to roam freely, starting with a small herd on the Wind River Indian Reservation in central Wyoming.

He said restoring a wildlife economy will require a shift in vision for land management away from the status quo driven exclusively by dollars.

“But for native people, a healthy environment is much more valuable,” Baldes explains. “As we restore bison to the landscape for their keystone role as an ecosystem engineer, then we’re restoring the land, and we’re thinking more about biodiversity and the interconnectedness of all these beings that are here.”

Unlike grazing cattle, which decrease plant and animal biodiversity critical for ecosystems, Baldes noted bison increase biodiversity by creating food and habitat for hundreds of species. Their dust bathing creates micro depressions important for seed dispersal and water accumulation. Their hooves naturally aerate the soil. Every winter they put on a new coat, which becomes available for many species of birds when they shed in the spring.

For thousands of years, the health and wealth of native communities in the region was directly connected to bison. Baldes pointed out despite being separated for 130 years, the animal is still very present in cultural belief systems including their annual sun dance.

“It’s in our sweat-lodge ceremonies, it’s in our house ceremonies,” Baldes says. “We still have songs about the buffalo. That animal historically was our life’s commissary, it was our store. It was where our foods, our medicines, our tools, our material came from.”

The Eastern Band of Shoshone were also widely renowned as “buffalo eaters,” and Baldes stressed bringing herds back to western lands managed as wild animals will also help tribes heal.

“We have the highest rates of diabetes and heart disease and other health-related issues because of the removal of buffalo from our diet,” Baldes emphasizes. “Incorporating that back into our diet again is very important. It’s the highest in protein, minerals and vitamins, and the lowest in fat and cholesterol than any other meat.”