Hearing football is back is one thing, but actually seeing the schedule and planning those annual tailgate parties is really what we all live for.

Now the time has come. 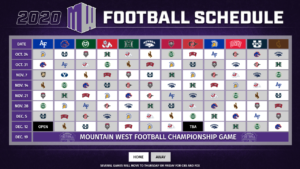 The Mountain West has officially slated out the 2020 eight game football season that is set to begin on October, 24th.

Along with the number of games, another difference this year will be that the conference will be division less. Over the nine week season a total of 46 games will be played with the top two teams meeting in the conference championship to conclude the season.

“We are excited to get our student-athletes back on the football field this fall,” said Commissioner Craig Thompson. “The shift away from a two-division format was necessary to optimize the schedule and allow for maximum flexibility given the various constraints which had to be considered. Inasmuch as the season begins with an uneven number of conference games, and the possibility exists additional games may be lost to COVID-19 challenges, the procedures for determining the participants in and location for the MW Football Championship Game were adapted to accommodate a range of outcomes in as equitable a fashion as possible.”

Wyoming will play its season opener at Nevada on October, 24th and end the season against Boise State at home on the 12th of December. Meeteetse Set for Showdown with Encampment