Wyoming residents might be tired of witnessing history – but some parts of the state experienced their lowest winter temperatures ever recorded last week.

The National Weather Service in Riverton complied the numbers recorded in cities and towns across the state during last week’s immense cold snap. While it was bitterly cold across Wyoming, certain locations broke their previously recorded low temperatures.

Casper’s high-temperature on Friday was 5 below zero. The last time Feb. 13 was that cold in Casper was 1949, with a high of zero.

Buffalo’s record low was one below zero, recorded in 2007. Last Friday in Buffalo, it was 20 below zero. This was the most extreme difference recorded in the entire state.

Meanwhile, many Bighorn Basin low-temperature records remain intact while others were shattered like thin ice.

Cody achieved a new lowest high (-8), but not a new lowest low. Both of the previous records were set in 1936.

The recorded low in Cody on Feb. 13 of 1936 was 26 below zero. Last Saturday’s low was only 13 below zero. For the record, the average high and low temperatures in Cody in mid-February are 37 and 18, respectively.

Freezing temperatures caused the early closure of several businesses in Cody last Thursday and Friday. Even Park County’s ski area, Sleeping Giant, shut down its operations on Friday the 12th as it was just too cold to be outdoors for prolonged periods of time.

Worland came within a degree of breaking its record for low temperature – minus 13, set in 2004. But it did set a significant record for the highest low, with an actual high of minus 4 on Feb. 12.

The clear record-breaker in the Bighorn Basin was Greybull.

Many other regions of Wyoming flirted with their coldest days, but the numbers show it was dangerously cold across the map. 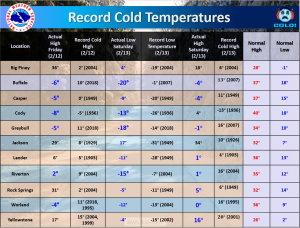 More snow is anticipated across Wyoming this week, particularly in the higher elevations. But it seems the subzero temperatures are gone . . . for now.