An innocent Wyoming man was found dead in his vehicle during a crime spree and fatal shootout with a suspect in Billings.

33-year-old Dennis Gresham was found dead inside his Ford Van on Friday, April 23. He was the victim of a vicious vehicle pursuit and crime spree.

Gresham’s death has yet to be confirmed by law enforcement officials. His wife, Megan Gresham, confirmed he was the victim in an interview with KTVQ in Billings.

She released the following statement on her husband’s death:

My Sweetpea is gone. On Friday, April 23rd, my husband Dennis Gresham’s body was found at a crime scene. He was the victim of a senseless, random, and hideous act of evil.

Denny was the purest, most untarnished, genuine soul. He was never anything but steady. He craved adventure, and he was always hungry to eat miles on his motorcycles. His big blue eyes were the window to thoughts that only sweet Denny was capable of conceiving and bringing to fruition. Solutions, ideas, innovations, improvements— He was a creator and passionate about opening those possibilities to anyone in the community, so he worked with a few amazing people and founded the Phorge Makerspace. He had his own way of understanding the world that was both uniquely genius and also so innocent.

Denny loved his entire family, especially Calvin and Malcolm. His devotion to fatherhood and raising our boys to be good men was unmatched. Nothing made him happier than seeing his family enjoying each other.

My poor sweet Denny was murdered. I can’t wash his towel because it won’t be his anymore. Our boys’ little coats were in the van with him. He left a half-eaten bag of Doritos. There’s an Amazon package for him on the porch. I can only hope he wasn’t scared or in pain for long.

I had to hold our boys and tell them that Dad is dead. Strangers hurt him, and he died. I had to tell them that they can talk to the chickens and the horses and the cats who will gossip with the meadowlarks. And the meadowlarks will carry the word and sing it to the mountains. And the pine trees will hear and whisper a message back from Dad on the wind.

According to official reports, the van was spotted on private property at 12:30 p.m. Friday, April 23. Officers approached a man and woman, attempting to cover the vehicle with a tarp.

When approached, the suspects entered the vehicle and fled. The Laurel Police Department, the Montana Highway Patrol, and the Yellowstone County Sheriff’s Office were all involved in the pursuit.

After crashing the van, the suspects fled on foot. The female suspect was captured soon after. Gresham’s body was discovered at this point.

The male suspect barricaded himself inside a home for nine hours. After opening fire on the officers and SWAT teams called to respond, the suspect was found dead after a shootout.

Details on the identity of the deceased male suspect have yet to be released. The only information released is that the suspect was “well known” to local law enforcement and died from a self-inflicted gunshot wound.

Denny Gresham and his family lived in Sheridan. He was in Billings that morning to pick up a friend from the airport.

After several hours, Gresham had failed to attend a virtual meeting for work and hadn’t picked up his friend at the airport. His wife posted on Facebook asking if anyone had seen her husband when she was made aware of the fatal crime spree and crashed van.

Surveillance video from the Yellowstone River Campgrounds shows the two suspects approaching Greshan’s van. They talk with him through the window of the van and enter it before the van drives off.

Denny Gresham and his wife have two sons, three and five years old. A GoFundMe has been set up for the family.

Another Grizzly Bear Moved Out of Meeteetse to Protect Cows 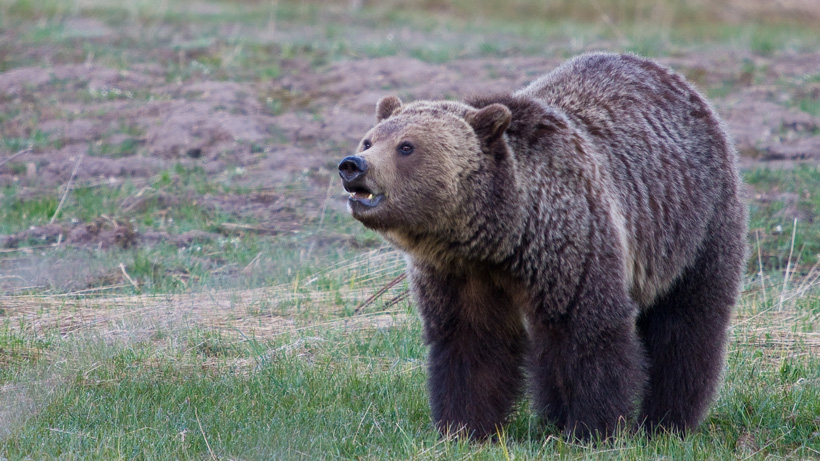