The first matchup of these two teams was 70 years ago in the Semi Final round of the Wyoming High School football playoffs in 1956.

Worland would win 19-0 over Rawlins and would continue on to face Torrington in the State Championship which Worland would also win 46-12.

It was 15 years later that the two schools would see each other again on the gridiron.

From 1971 until 1982 these teams faced each other every year each team winning 6 games during that period.

They would again skip several years and meet again in 2011 that series continued for 3 seasons until 2013.

Skipping again for 5 seasons when they would pick up in 2018 and have been playing each other since.

Worland has played Rawlins 21 times the Warriors winning 15 of those.

The Warriors have won the last 8 games in a row.

Worland is (2-2) this season with wins over Powell and Green River.

The Rawlins rushing attack is ranked 3rd in Wyoming 3A football averaging 201.2 yards per game.

Passing wise Rawlins is ranked 12th in Wyoming 3A football with 10.8 yards per game.

Worland is ranked 5th in passing with 178.5 yards per game.

On the defensive side of the ball, Worland is 9th against the run giving up 210.8 yards per game.

Rawlins is ranked 10th giving up 227 yards per game on the ground.

Rawlins’s passing defense is number 1 in Wyoming 3A football giving up just 57.3  yards per contest.

Worland is 9th against the pass with 155.2 yards given per game.

Dian Henson leads the Outlaws in rushing with 356 yards and 3 touchdowns.

Worland is led by Kade Weber with206 yards and 3 touchdowns on the ground.

Passing for the Outlaws is led by Aaron Chico with 1 pass for 22 yards.

The Outlaws Quarterback is Ezra Archuleta going 4 for 8 with 21 yards and a touchdown.

The Warrior’s Quarterback Kade Weber is 56 for 89 in completions with 696 yards 8 touchdowns and 1 interception.

Listen to the game on KWOR 104.7fm/1340am or online at mybighornbasin.com 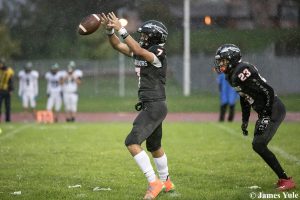