A Cody man who was convicted of accidentally shooting tourists two years ago during a Gunfighter show was taken into custody again over the weekend.
Steve Winsor was sentenced in September on five counts of misdemeanor reckless endangerment for using a loaded pistol during a Gunfighter show in July of 2016. Three tourists were injured, and Winsor was sentenced to almost a year in prison. But he was given credit for 168 days time served, which means he was released this spring. According to court records, Winsor was then subject to four years of unsupervised probation.
Additionally, Winsor was arrested last April, prior to his sentencing, for possession of methamphetamines and his black powder pistol, both of which violated his bond conditions at the time.
This past weekend, Winsor was observed by a Cody Police Officer to be exhibiting behaviors that pointed to the use of a controlled substance, and subject to his probation conditions, Officer Patrick Geraghty ordered Winsor to undergo a drug test. Officer Geraghty’s affidavit of probable cause notes that Winsor was found to have THC in his system, and he was arrested.
Winsor appeared in Park County Circuit Court yesterday, where he was ordered to pay a fine, given a suspended jail sentence of 90 days, and six months probation. There is no information available yet as to whether or not this arrest will result in a revocation of his probation in the earlier matter.

Planning for Next Year’s Fireworks Show 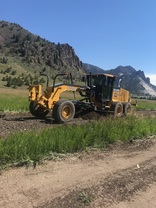