The premiere of House of the Dragon, the spin-off of the worldwide phenomenon of George R.R. Martin’s Game of Thrones, premieres on August 21st on HBO Max. 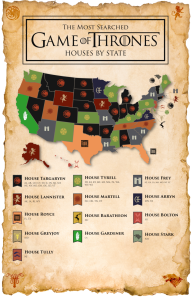 The team at USDish, an online authorized sales team at Dish Network, recently conducted some research regarding this question, “what Great House would each state in the US be?”

According to their report, Wyoming’s favorite Great House from Game of Thrones is House Lannister. The full report can be found by clicking here.

Montana’s result is House Targaryen. These results are based on the National Google Search volume.