A GoFundMe account for a severely injured tourist serves as a painful reminder of just how dangerous thermal water can be in Yellowstone National Park.

When someone is injured in Yellowstone, the story usually stops once transported to a hospital for treatment. But, in this case, a social media campaign offers insight into the deadly nature of the nation’s first national park.

On the afternoon of Oct. 4, 20-year-old Ladonna Slayton suffered significant thermal burns over most of her body after diving into the Firehole River and the Maiden’s Grave Spring, south of Madison Junction. The woman jumped into the thermal features to save her dog.

Slayton remains at the Eastern Idaho Regional Medical Center, where she will remain in critical condition for weeks – possibly months – to come.

After the incident, Slayton’s father drove her to West Yellowstone. She was then transported to the Eastern Idaho Regional Medical Center, where most people injured in Yellowstone are taken.

“My sister’s palms are completely gone and will have to go into surgery and possibly for the rest of her body too,” said Kamilla Slayton, Ladonna’s sister. “She is in a medically induced coma for two weeks.”

According to a GoFundMe page set up for her benefit, Slayton has second to third-degree thermal burns on 90% of her body. Unfortunately, the dog she tried so hard to rescue did not survive.

The GoFundMe campaign seeks $45,000 for Shayton’s medical expenses, her family’s room and board while in Idaho, and cremation services for her dog. As of Thursday, Oct. 7, over $26,000 has been donated to the case. 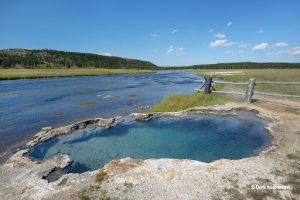 Yellowstone officials use the unfortunate incident for familiar refrains – stay aware of thermal features and secure your pets.

This is the second significant injury in a Yellowstone thermal area in 2021. On Sept. 16, a 19-year-old park employee suffered second and third-degree burns over 5% of her body after falling into a thermal feature in the Old Faithful Geyser Basin.

Several incidents like this have occurred over the past few years.

Shayton’s incident is eerily similar to a fatal one 40 years ago. In 1981, David Allen Kirwan of California died in a Salt Lake City hospital after saving his dog from the Celestine Poll near Fountain Paint Pots. He suffered third-degree burns on 100% of his body.

In 2021, a Washington tourist saved his dog from an unnamed Yellowstone thermal feature. Thankfully, he only spent a day in the hospital and only incurred 2nd-degree burns.

While in Yellowstone, pets must be in a car, crate, or on a leash no more than six feet long. They are not allowed on boardwalks, hiking trails, in the backcountry, or in thermal areas for the reasons, unfortunately, evidenced this week.

KODI Broadcast and Sports Schedule for October 5th through 9th