Yellowstone National Park seems to be celebrating 2020 in its own way – a swarm of earthquakes concentrated under Yellowstone Lake.

The United States Geologic Survey’ Yellowstone Volcano Observatory has been monitoring an earthquake swarm insider the Yellowstone caldera. Several dozen have been recorded in the same area – midway down the eastern side of Yellowstone Lake.

All the recorded quakes have occurred between Dec 1 and 7, and many more are likely to have happened since the seismologists at the observatory published their findings in the weekly column Yellowstone Caldera Chronicles on Dec. 7. The magnitude of each quake ranges from M0 to M2.

Furthermore, the entire cluster is occurring directly along the caldera boundary – a fault in the earth that formed when the surface collapsed during the last explosive eruption of Yellowstone, over 631 thousand years ago.

So, what does it mean? Not much.

While seismologists admit this cluster is a bit larger than usual, an earthquake cluster is not an unusual thing in Yellowstone. In fact, most of the hundreds of recorded quakes in the park every year occur as part of clusters like these.

The last Yellowstone earthquake swarm was reported in September of this year – 100 earthquakes in 24 hours.

This swarm is much weaker but no less interesting, particularly given its location along the caldera boundary and the fact that – unlike the 08-09 swarm – it isn’t migrating from its current location. The observatory will continue measuring and monitoring the swarm to see what kind of behavior it shows next.

. . . and it isn’t the sign of an imminent eruption of the super-volcano. That’s one catastrophe that will be avoided in 2020. 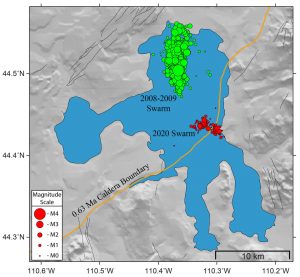 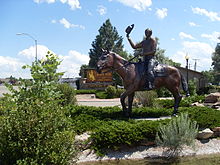