From the familiar names at the top of the bracket — Gonzaga, Kansas, Baylor — to the well-worn debates all across it — why did Coach K get shipped out West? did somebody do Dayton wrong? — this version of Selection Sunday felt as comfortable as a well-worn Air Jordan.

March Madness is back to normal, or as close to normal as it can get, and that means all those stunning upsets and once-in-a-lifetime game-winners will play out in front of crazy crowds for the first time in three years.

“This was a really special year because we all realized what we missed,” said Villanova coach Jay Wright, whose second-seeded team won the Big East title in front of a packed house at Madison Square Garden.

Gonzaga is the overall top seed, with Arizona, Kansas and Baylor joining them on the “1” line for this “seems like old times” NCAA Tournament. It’s the first since 2019 to be played in different cities and different time zone across America. The party lands in New Orleans for the Final Four and championship game April 2-4.

It’s a return to the way things were before the pandemic scrubbed the tournament completely off the 2020 calendar, then turned the 2021 event into a one-city-fits-all affair — all the games played in a makeshift bubble in front of limited crowds in and around Indianapolis.

“It’s all about staying in the moment and having more fun than anybody in the tournament,” said John Calipari, the coach of second-seeded Kentucky.

The best way to have fun, of course, is winning it all. Baylor did that last year in a title-game romp over Gonzaga. Just like last year, both are No. 1 seeds again, with the Zags the 15-4 favorite to win the title, according to FanDuel Sportsbook.

“A great learning experience,” Gonzaga’s Drew Timme called last year’s second-place finish in an interview on ESPN. “Obviously, things didn’t go the way we wanted. But it allowed for a lot of self-growth for the program. We’re excited for the challenge.”

Some players to watch over the next three weeks include Kentucky’s Oscar Tshiebwe, one of dozens who switched schools via the amped-up “transfer portal” that is displaying a penchant for reshaping college hoops at the blink of an eye.

Kofi Cockburn leads No. 4 Illinois into a first-round matchup against Chattanooga, and freshman Jabari Smith leads slumping No. 2 Auburn into the Midwest Region, where a potential matchup against conference rival LSU, which fired coach Will Wade earlier this week, is in the offing.

Coach Mike Krzyzewski’s last tournament before retirement has Duke playing as a No. 2 seed in the West. His road to a 13th Final Four could include a second-round matchup against Tom Izzo and Michigan State. And while some thought the selection committee might send Coach K to his native Chicago and the Midwest for the Sweet 16 as a farewell gift, of sorts, instead it would be a trip to San Francisco and a potential meeting with Mark Few’s Bulldogs.

It’s one thing to face a tough bracket, quite another not to be in it at all. Dayton, Oklahoma, SMU and Texas A&M were the “first four out,” meaning there’s still a glimmer of hope for them if a team must make a late withdrawal due to COVID-19.

Xavier wasn’t even on that list, which went down as one of the evening’s biggest snubs. That was according to Dick Vitale, the national treasure who was forced to spell things out on a white board — not shout about it — while he rests his vocal cords after cancer treatments. Dickie V also thought Tennessee, as a 3, and Iowa, as a 5, got worse seeds than they deserved after winning their conference tournaments.

Dayton would have been in were it not for an upset in its Atlantic 10 conference tournament. Richmond slipped past Davidson for the title, and while Davidson still made the field, Dayton did not.

“Our committee really liked Dayton,” said selection committee chair Tom Burnett. “They were deserving of consideration, but unfortunately, they ended up on the ‘first four out’ list.”

Teams that just slipped in included No. 12 seeds Wyoming and Indiana, who will square off in the First Four. No. 11 seeds Rutgers and Notre Dame were the other last two teams in, while

Michigan was seeded 11th, as well.

The Fighting Irish, Hoosiers and Wolverines are among the nation-leading nine teams to make it from the Big Ten. That’s the same number as last season, but the conference only moved one team to the second weekend. The Big East, Big 12 and Southeastern Conference placed six teams each.
___
More AP coverage of March Madness: https://apnews.com/hub/march-madness and https://apnews.com/hub/college-basketball and https://twitter.com/AP_Top25

Now that NCAA brackets are out, here’s what you should know 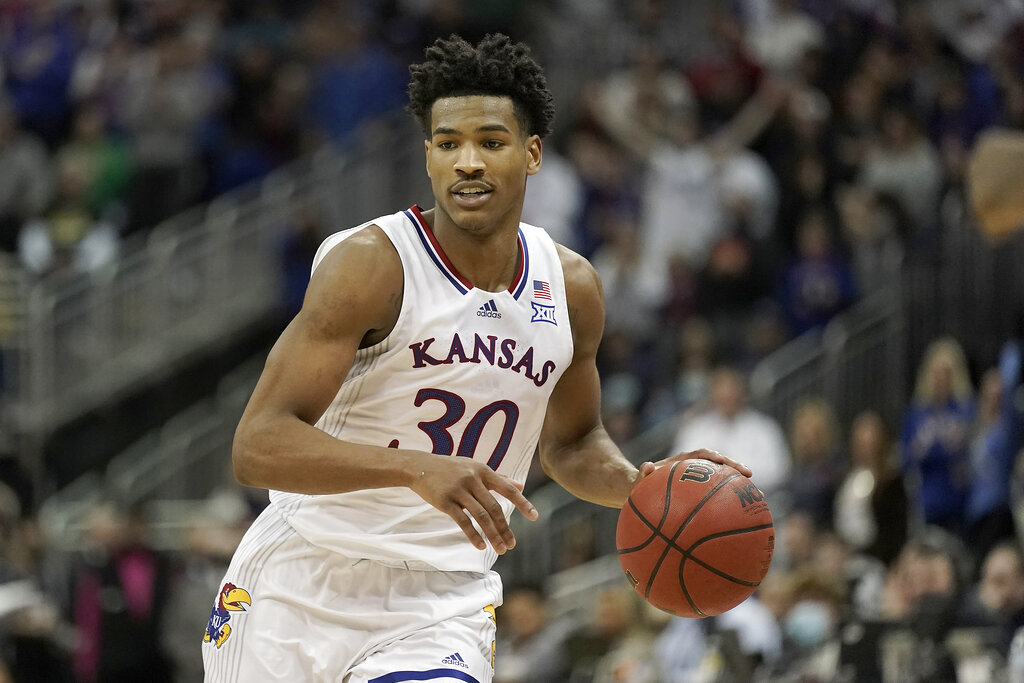