Technological advancements and a fiscally secure future were the main topics of discussion at a candidate forum yesterday in Cody.
The democratic and republican candidates for Governor, Secretary of State, and State Auditor met with voters at Cody Club, as well as at a meet and greet yesterday evening at the Holiday Inn. At the luncheon, each candidate was given a few minutes to tell attendees about themselves, their backgrounds, and their vision for Wyoming’s future.
Democrat Mary Throne and Republican Mark Gordon spoke on separate issues. Throne told KODI News that she felt political affiliation was unimportant when it comes to the issues that are facing the state.

And Gordon noted that fiscal stability was vital for the future of the state. 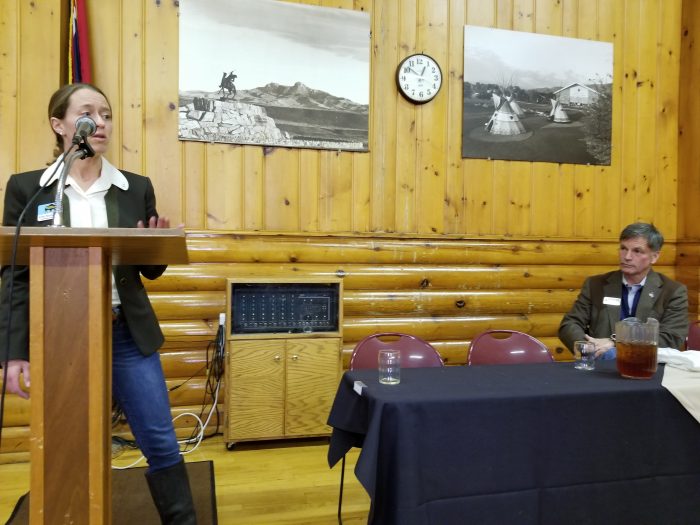 Two other parties have candidates on the ballot for the Governor’s seat – Liberterian Lawrence Gerard Struempf of Laramie and Constitution Party candidate Rex Rammell of Rock Springs are also in the race, but were not in attendance yesterday.
For the Secretary of State position, Republican Ed Buchanan, who was appointed to that position in March, will be facing off against Democrat James Byrd of Cheyenne, who has been a member of the Wyoming House of Representatives for the last ten years. A third candidate, Libertarian Kit Carson, was not in attendance. Both Byrd and Buchanan expressed their intentions to use technology to improve the efficiency and ability of the office.
The State Auditor’s race is between democrat Jeff Dockter of Cheyenne and Republican Kristi Racines, a native of Riverton. Both spoke of the need to improve government transparency.
The midterm elections will be November 6th.