Homes and buildings are burned down in Clark after 100 mph winds knocked down trees and powerlines, sparking a 300-acre wildfire around Line Creek.

Park County Fire District #2 has been busy since Monday night, battling a wildfire near Clark. The unexpected and quick-burning fire was aided by extremely powerful winds, which continued to make extinguishing the fire extremely difficult.

Jerry Parker, Administrator and County Fire Warden with Park County Fire District #2, says the cause of the fire was trees and powerlines blown over by Monday night’s windstorm. Unfortunately, the hurricane-force wind is also making efforts to fully extinguish the fire difficult.

Soon after, a Code Red evacuation was ordered for Line Creek and the surrounding area. 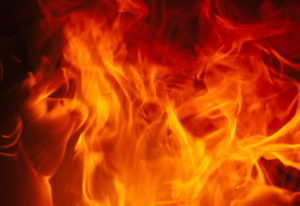 At least two primary residences and eight other buildings were lost to the fire, which was contained and still burning on Tuesday afternoon.

The total acreage of the fire is somewhere between 300 and 400 acres. As of 2:30 p.m. Tuesday, the fire was mostly contained by firefighters who were still actively engaged at the scene.

“I haven’t got a percentage number, but there is still a lot of interior burning, “Parker said. “We’ll probably be on it all night, especially with the wind conditions we’re expecting.”

Clark, Cody, and Meeteetse were under a High Wind Warning between 2:00 p.m. Monday and 5 p.m. Tuesday. Winds gusts of up to 60 m.p.h. were anticipated in the Cody Foothills.

The National Weather Service released a preliminary report of peak wind gusts around Wyoming Tuesday morning. Clark was one of the areas that was hit hardest, with the peak wind recorded at 75 m.p.h.

Parker said gusts as strong as 100 m.p.h. were reported during the night’s firefighting efforts.

The American Red Cross has been notified and will be administering aid to the Clark families who lost their homes to the wildfire.

In the meantime, assistance is being provided at the Clark Recreation Center and Clark Fire Hall.