The impact of this week’s intense winter weather is enormous – major Wyoming highways were closed, communities isolated, and tourists unable to travel.

Wyoming was hammered by unseasonably snowy weather earlier this week. And, based on W.Y.D.O.T.’s Travel Information Map, it shut down a significant portion of Wyoming on Tuesday and well into Wednesday.

The National Weather Service Office in Riverton issued a Winter Storm Warning for western and central Wyoming, which only ended at 11 p.m. Tuesday. Anywhere from eight to thirteen inches of snow was predicted to fall throughout the Bighorn Basin. Central Wyoming was expected to get up to 40 inches of snow.

W.Y.D.O.T’s 511 Travel Information Map is the most accurate and up-to-date resource for the state’s road conditions and traffic information. And – if the map is any indicator of Tuesday’s winter weather – it seems the storm was every bit as severe as was predicted. 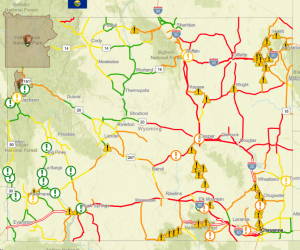 On Wednesday morning, several of Wyoming’s most important highways – including all routes into Casper and Gillette – were closed due to Tuesday’s snowstorm.

W.Y.D.O.T. effectively stopped all access to Gillette, restricting unnecessary travel on every route leading into Wyoming’s fourth most populous city. Casper was similarly shut off,  as all three major highways leading to town – Wyoming Highway 20, Interstate 25, and Interstate 90 – were closed entirely.

Douglas, Wright, and Glenrock were similarly shut off from the rest of Wyoming. Sheridan residents could travel to Buffalo, but no further.

I-80 was completely shut down from Cheyenne to Rock Springs. In addition, the portion of the highway from Rock Springs to the Utah state line was partially closed.

These closures effectively meant Wyoming was “closed for business” as there were few open highways in and out of the state.

By Wednesday afternoon, the situation improved. As a result, Highway 20 between Shoshoni and Casper changed from “Closed” to “Medium Impact,” as did I-90 from Casper to Buffalo and the entirety of I-80.

However, all routes into Gillette were still closed. As of 2 p.m. on Wednesday, Oct. 13, there was still no way to get into or out of Gillette.

Highways between Cheyenne, Wheatland, Laramie, and Rawlins were either partially closed or perilously slick. Unnecessary travel between these stops was prohibited. 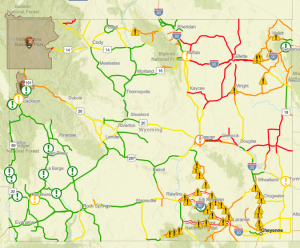 In the Bighorn Basin, the storm didn’t impede local traffic – but Yellowstone tourists had no way of using the East Entrance to get into Cody.

While snow fell throughout the Bighorn Basin, it amounted to little more than a light dusting. As a result, all highways throughout the region were slick but open to all traffic.

The story was different in Yellowstone National Park. Sylvan Pass – the route between Fishing Bridge Junction and the East Entrance – was closed and reopened several times between Sunday, Oct. 10, and Wednesday, Oct. 13.

On the afternoon of Monday, Oct. 11, every portion of Yellowstone’s Grand Loop Road was closed except for the part between Gardiner and Mammoth Hot Springs. Many portions of the loop stayed closed until Wednesday morning.

These Yellowstone closures may have trapped tourists in some regions of the park. But it definitely stopped them from reaching Cody and the rest of Wyoming.

This week’s winter storm seemed to catch everyone off-guard, including Wyoming and its highways.

The map can be accessed anytime on the W.Y.D.O.T. website.  The Wyoming 511 app is also available for iOS and Android.