Cody Bronc Basketball Back in Action

The Cody Bronc basketball team has officially hit the hardwood to begin practicing for the 2020-2021 season. The Broncs lost five seniors to graduation and not only will look to fill those shoes but have the pieces to do it. While the Broncs are coming off a 2019-20 campaign in which they finished 8-14 overall, 3-3 in league play, they enter their third season at the 4A level with a renewed confidence and believe they have what it takes to compete at the highest level. I caught up with a pair of those seniors as well as head Coach Jake Kraft to get their thoughts on being back in action.

Caleb Pryor is one of few returners that saw extended time at the varsity level a year ago and talks about how he and this years seniors must establish the right culture early on.

“We’re just going to have to set the tone for the others. Especially in these weeks of practice, leading up to our first game. Kind of start to prepare them for what it’s like. 4A basketball is a whole another level than JV or middle school ball that we played together but we definitely have some guys that are ready to step up. Might take a little bit to get used to it but I think they’re ready for the job.”

While Cody does return a lot of pieces from last year, not many have seen substantial varsity minutes. That said Caleb believes this group is more than ready to take the next step.

“I think there’s going to be a lot of us, that, just like last year have the ability to score each and every night. I think Luke, we’re just going to see Luke get even better than he was last year. I mean, he’s a tremendous athlete and he’s just, he’s only up from here. And I think we have a lot of guys that have the confidence to take those last second shots. We have multiple guys that can take over a game.”

Nic Talich will be another senior that is relied upon for the Broncs to be successful this year. While the name of the game is to outscore your opponents, Nic believes their strongest attribute will be outworking everyone they play.

“I’d just honestly say our grit and toughness. I mean, just to come together. We just want to, we’re going to go out there and hustle hard and work hard. That’s going to be our biggest, I think, thing and we’ll end up scoring points and playing defense but our biggest, our strongest suit is definitely our hustle.”

Like many sports teams at CHS the camaraderie for this boys basketball team is through the roof and Nic adds how that’s a big benefit during the long winter months.

“I think it’s a real big advantage. I mean, if you’ve got guys that are unselfish and just part of a team, I think that’s what you’re saying, I think we are just part of a team. That’s always been easy for Cody. I think it’s because we are unselfish and we don’t care about scoring, we don’t care about points and stats but I think that’s going to one of our most attributes this year.”

Jake Kraft is back at the helm of Bronc basketball once again and goes on to talk about some players to keep your eye on this year.

“You know the seniors who haven’t touched the ball in a varsity line-up that much. The Tucker Lynn’s, the Canyon Dim’s. Those type of kid, a Tristan Dollard, those guys have opportunities this year that they haven’t had in the past. So I look forward to that. Somebody like a Kamden Niemann, as a sophomore, can really shoot it. Interested to see where he’ll end up in our line-up and somebody like a Remy Broussard, who had such a successful football season and is a super athlete, we’re excited to see what he can do around the rim.”

And not to get lost in all of this with everything going on in the world with COVID coach calls it an honor and a privileged just to be able to get on the courts.

“Knowing that six months ago this was maybe not going to happen, we’re just extremely grateful to have the opportunity. I don’t think a lot of people recognize the efforts that happen off the court to get this done. Between our health department and our administration, our school board, to trust that us as coaches can regulate this enough that we can have a season. So I’m grateful for all that support.”

Stay tuned tomorrow for a preview on the Cody Fillies basketball team. Below are some photos from the Cody Broncs practice. 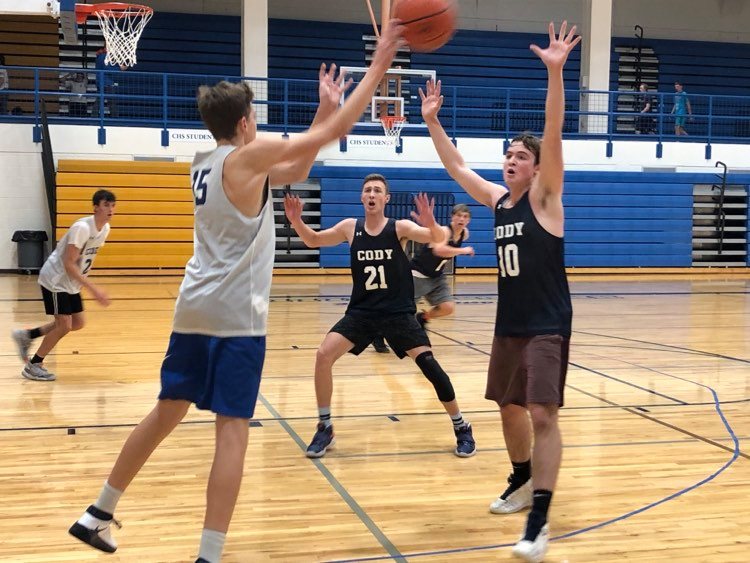 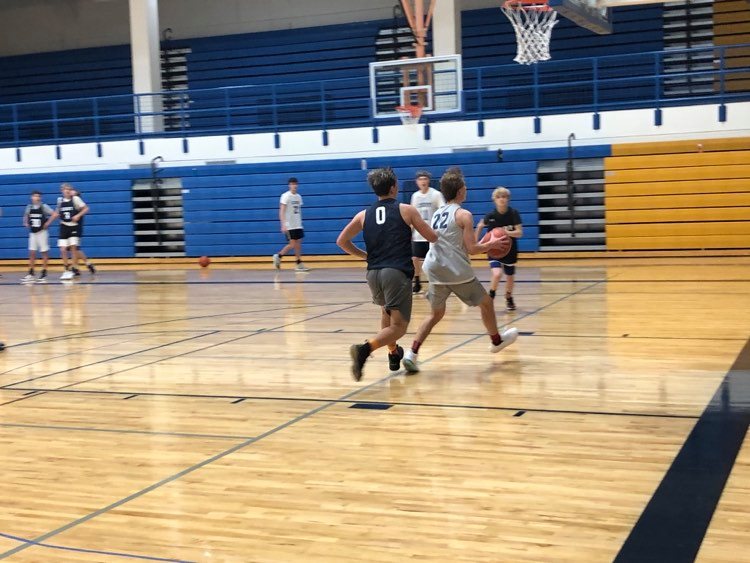 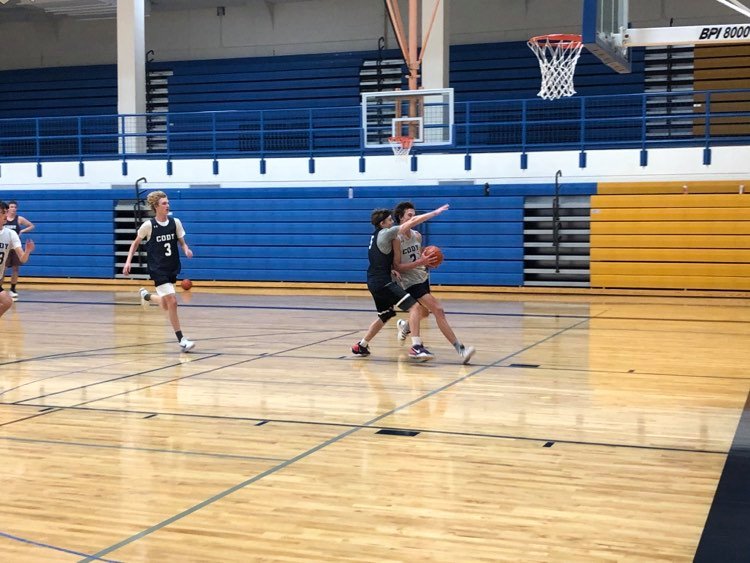 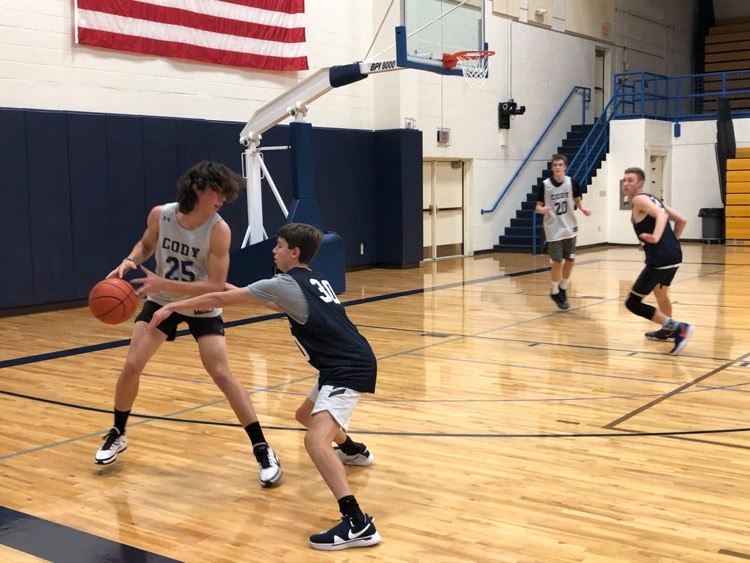 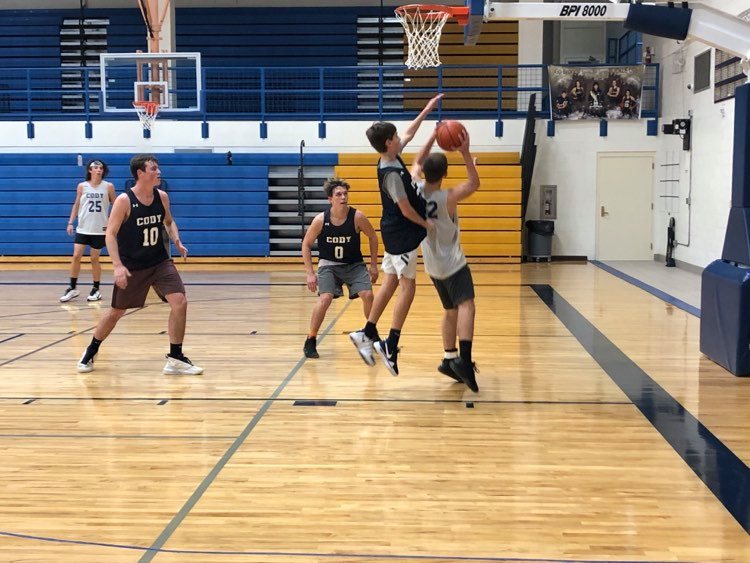 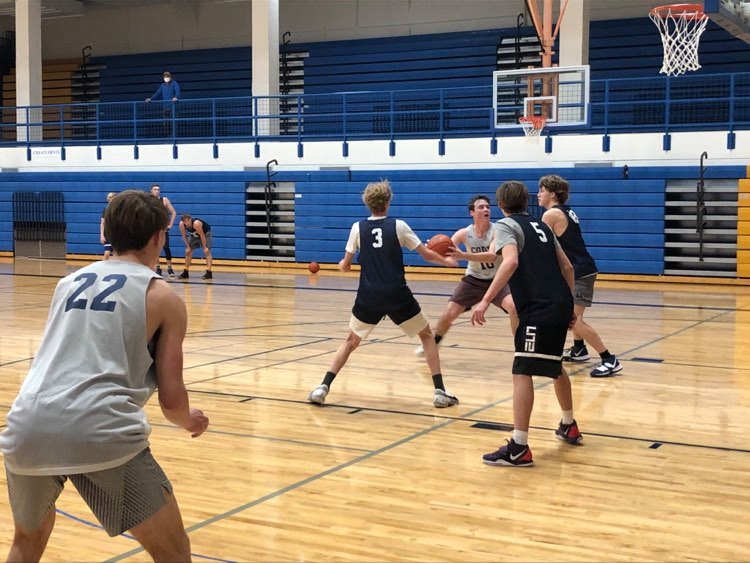 Pryor in the lane 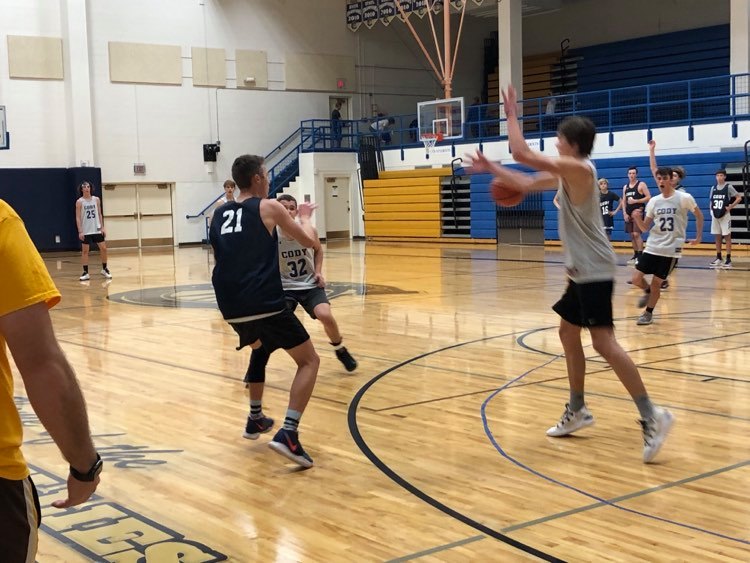 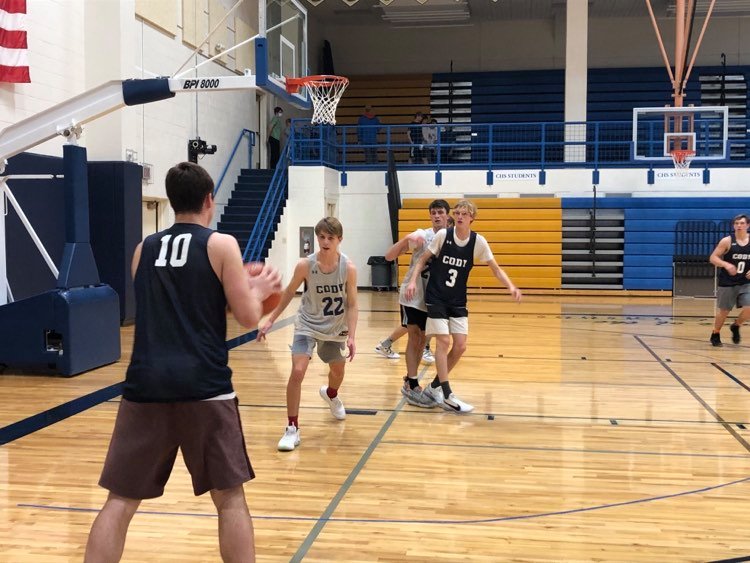 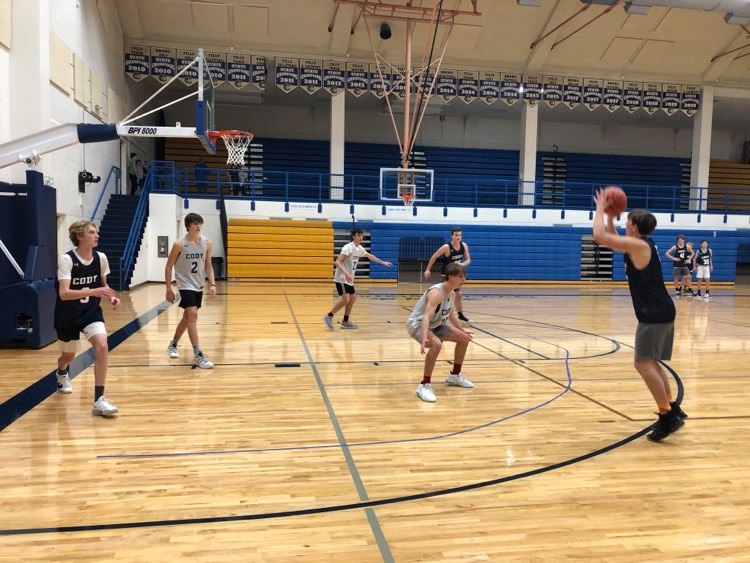 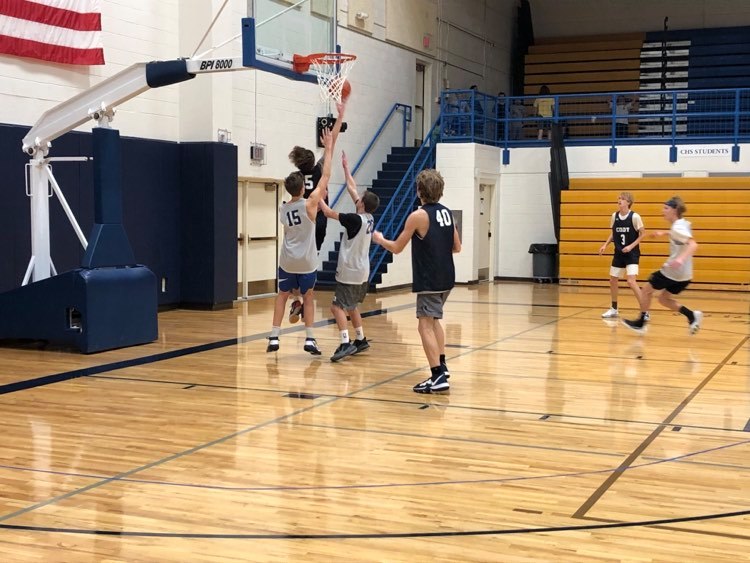 A Bronc slices through the defens 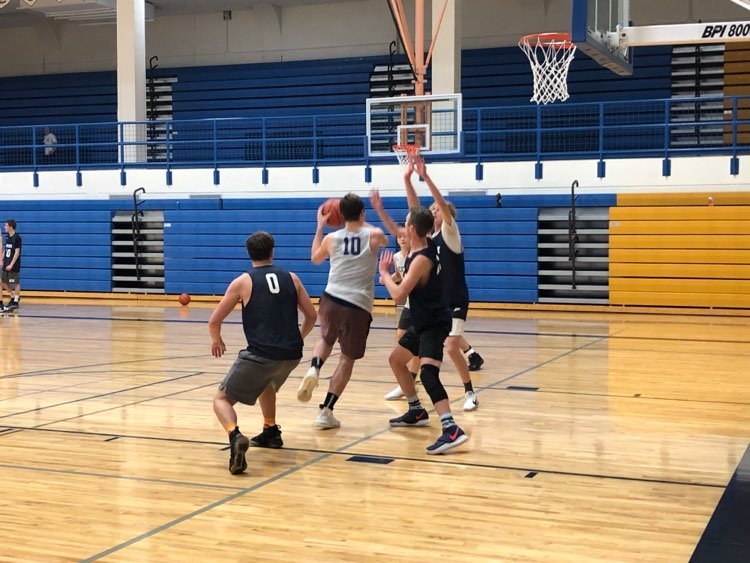 Pryor out of a trap 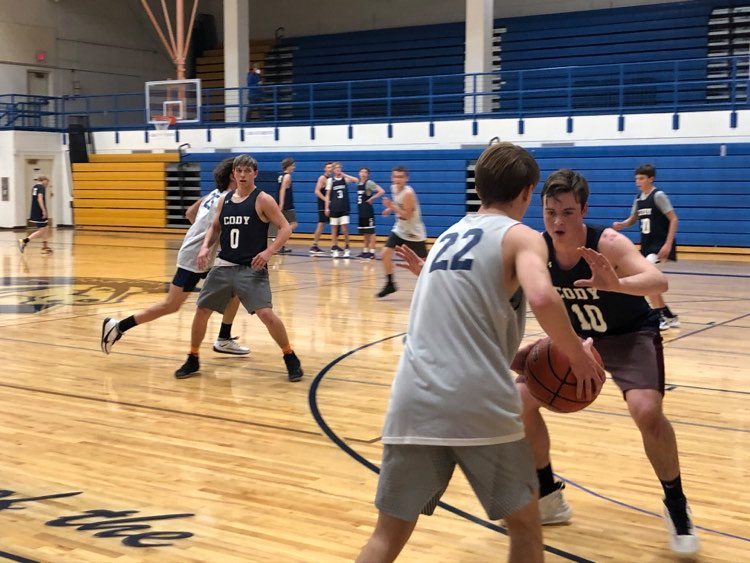 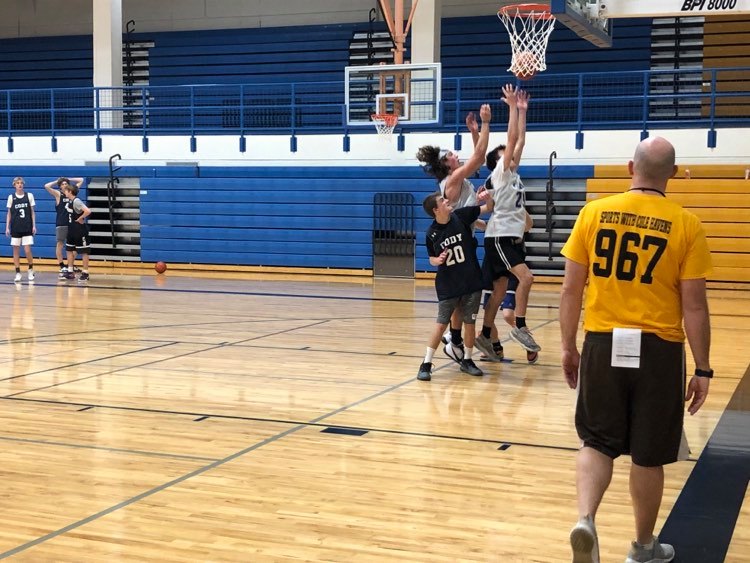 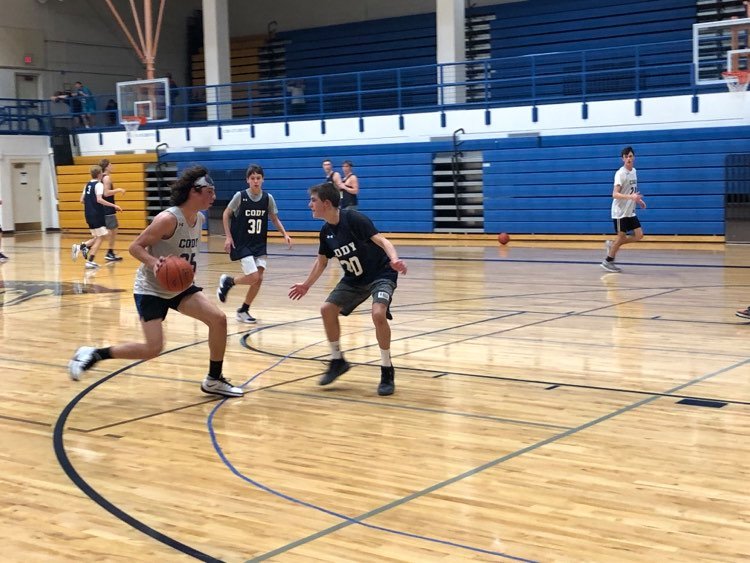 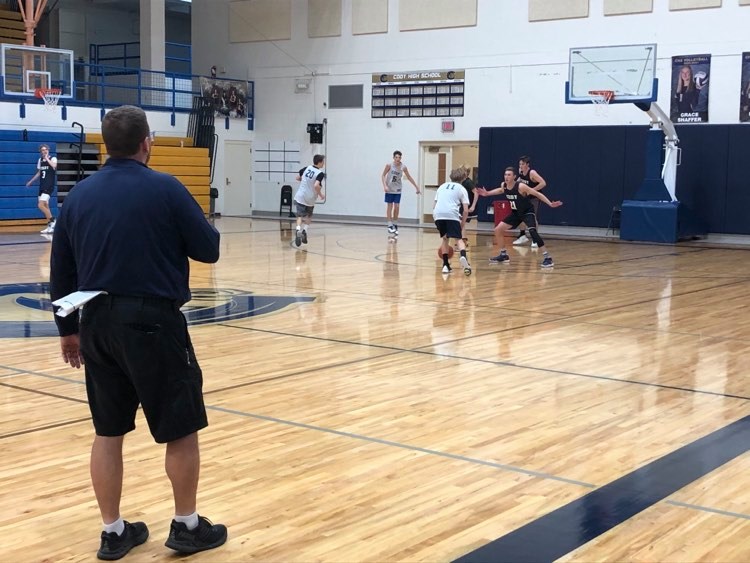 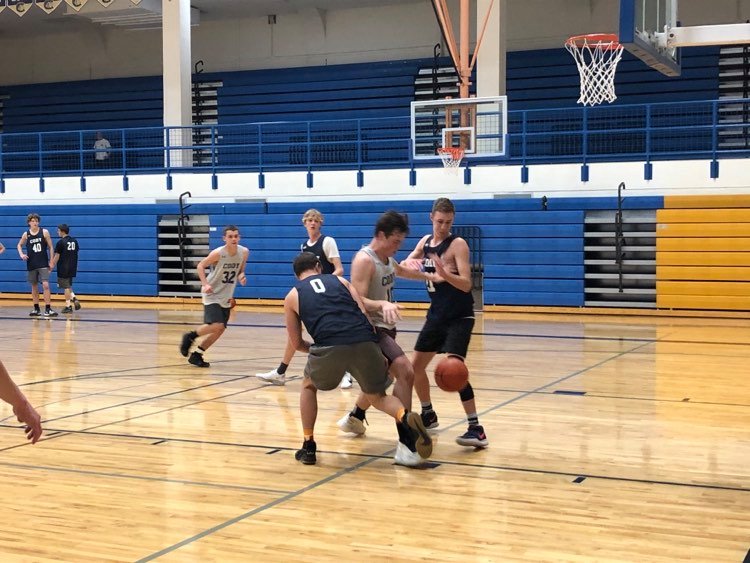 The Tradition Continues with Warrior Wrestling