The Robertson Draw Fire in Custer Gallatin National Forest is over 20,000 acres and 0% contained, and the smoke is making the skies of Cody hazy and hazardous.

Efforts to fight the ongoing Robertson Draw Fire continue. In three days since it was first reported, the wildfire has consumed 20,000 acres, and the results of its devastation have begun encroaching on Cody.

150 personnel are currently responding to the incident with numerous resources en route. According to InciWeb, incoming resources include hand crews, engines, helicopters, a rappel crew, and support personnel. Additionally, air tankers continue supporting the ground efforts to stop the fire.

As of June 16, the Robertson Draw Fire is 0% contained.

A Type 2 Incident Management Team will be taking command of the fire soon. This team will work with the Type 3 team initially managing the fire, led by Bob Culbreth.

In Montana, evacuations continue. The Red Cross has set up a shelter at Red Lodge’s Veteran Memorial Civic Center for evacuated residents of the following areas:

The town of Bearcreek, Montana, remains under an evacuation warning. 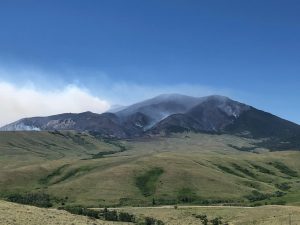 Shoshone National Forest is taking a preemptive step to avoid a common cause of wildfires: campfires.

Forest officials issued a statement to protect their forests from similar blazes. While the cause of the Robertson Draw Fire remains unknown, Shoshone National Forest is already targeting one of the primary causes of recent wildfires.

“While there are not currently any fires on the Shoshone National Forest, vegetation is drying out rapidly this year, and our fire danger ranges from very high to extreme,” said Fire Management Officer Clint Dawson. “It is very important for people to be extra cautious with any campfires or open flames of any sort that they may have this coming weekend as our grasses and fine fuels are much drier than normal for June.”

For comparison, the 2019 Fishhawk Fire in Shoshone National Forest was contained after burning just over 11,000 acres. The Robertson Draw Fire – as of Wednesday, June 16 – has burned 21,000 acres and is completely uncontained.

While the fire has yet to threaten Wyoming substantially, its smoke has settled over Cody and could exacerbate health problems – so at-risk individuals might consider wearing a mask.

Cody and most of the Bighorn Basin are under an advisory for smoke as well as record-high temperatures. On Wednesday, the smoke of the Robertson Draw Fire and Crowded Creek Fire in Montana’s Pryor Mountains descended on Cody. 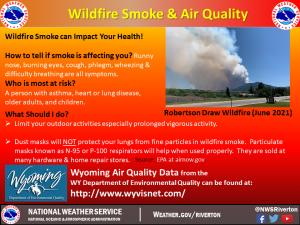 Smoke from the Robertson Draw Fire is likely to persist in Cody’s area throughout this week.

DONATIONS BEING ACCEPTED IN CODY