The 6,000-acre Crater Ridge Fire in Bighorn National Forest is slightly less contained than it was last week, as the fight moves over the Montana state line.

When the fire was first detected on July 17, it was only 200 acres in size. Over the next several weeks, the fire has grown slowly, burning its way along Cub Creek. The cause is unconfirmed but suspected to be a lightning strike.

Since then, the fire has significantly grown. Since Aug. 9, the Crater Ridge Fire has more than tripled in size.

Containment has dropped slightly but not a concerning amount. The percentage contained was 30% last week and 28% on Tuesday.

The latest daily update describes the current fire activity as “minimal,” with no acreage gains. Despite this, heat remains within the fire perimeter. The fire will become more active as late August continues to get warmer and drier.

Yesterday, firefighters constructed direct firelines on the north and southeast fire perimeters. Meanwhile, existing firelines were reinforced by cold trailing and mop up.

Cold trailing is a method to contain a fire edge that is partly dead. Personnel carefully inspect the edge, feel it with their hand for heat to detect any fire, dig out every live spot, and trench any live edge. 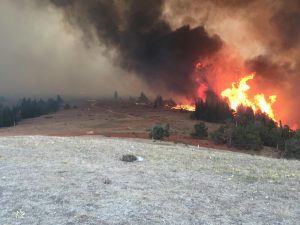 Firefighters are scouting north and northeast of the Crater Ridge Fire – including near and across the Wyoming border into Montana.

Scouting the Montana state line isn’t a necessity at this point – just a precaution. Firefighters want to identify “strategic areas” for direct and indirect firelines if the fire moves into Montana and the Crow Reservation.

Drones continue to provide valuable information on the Crater Ridge Fire’s growth and intensity. A drone equipped with an infrared camera is assisting firefighters in detecting hot spots along and outside the fire perimeter.

Weather conditions seem favorable moving forward. The forecast for Bighorn National Forest has a chance of thunderstorms thru the next week, which may bring some moisture to the fire area.

The official consensus is that the Crater Ridge Fire will continue burning until “a season-ending event” – most likely the first heavy snowfall. While snow has fallen at the higher elevations, it wasn’t enough to make any significant difference.

Stage 1 Fire Restrictions are in effect in Sheridan County, where the fire is located. For fire restriction information in counties throughout Wyoming, see https://wsfd.wyo.gov/fire-management/fire-restrictions

An area around the Crater Ridge Fire in the northeastern portion of the Medicine Wheel Ranger District (north of Medicine Mountain), including roads and trails, remains closed to public entry. Fire Danger in Bighorn National Forest stands at High.

The Federal Aviation Administration has enacted a Temporary Flight Restriction (TFR) for the fire area and the nearby Stagecoach Reservoir. Drones are hazardous for pilots and ground crews, so that no pilots may operate an aircraft in the area.