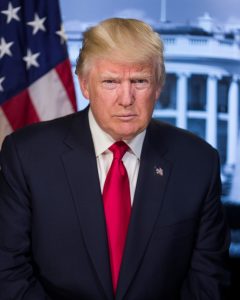 Regarding the rally, “We’re gonna have a good time, the crowd is going to be fantastic,” Trump adds. Roughly 20,000 people are expected to attend the rally and there will be screens in the parking lot to broadcast the event for those unable to be inside the Ford Wyoming Center.

Trump and his Republican allies think the country is headed in the wrong direction under Biden’s administration, saying, “How our country was two years ago? We have to get our country back.”

The campaign season is already heating up between Hageman and Cheney. Trump, clearly critical and disapproving of Cheney’s politics, says Cheney has become a “radical Democrat.”

Trump calls Wyoming, “an incredible place,” saying that he wanted to come to the state, “out of respect.” Trump added that he “won by a massive amount” in the state of Wyoming in the last election.

Lamenting the political division in the country, Trump says, “the country is so divided now, so much animosity and hatred.” He also took a moment to reflect on the school shooting in Uvalde, Texas. According to Trump, the “school had absolutely no protection.” He also noted that taking away guns from law-abiding citizens is “not the way to solve the problem.”

In terms of the Republican party as a whole, Trump thinks the party has shifted toward a “basically America first” stance. He joked about his supporters as “ultra-MAGA” people. In that light, Trump says, “I put America first over China, over all these other places – I put taxes and tariffs on China.”

“Our steel industry was going down the drain, China paid hundreds of billions of dollars in taxes in tariffs,” Trump remarks. Further condemning China, Trump says, look at “the damage these people have done with COVID.”

Speaking about the war in Ukraine, Trump says, “I was tough, I was the worst thing that ever happened to him [Putin].” Trump believes he could have prevented the Russian war with Ukraine, saying, “It never would have happened if I were president…Now it’s a loser for everybody, lives lost so needlessly.”