In The Form Of A Question | Big Horn Radio Network | Wyoming

You’ve probably hummed it in a silly way with a goofy expression on your face as you waited for somebody to answer a question. What is….. As you scream at the T.V….  WHAT IS… WHAT IS…

The iconic theme song for Jeopardy!, the TV game show hosted by Canada’s Alex Trebek. He hosted from 1984 until his death in 2020, has become a pop culture signifier for “time’s running out.”

No one can ever replace him, but if you had to pick who would it be?

May His Star Always Shine. 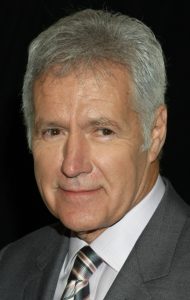 “The rating represents the number of TV households estimated to be watching a show.”  According to Nielsen, there are 121 million TV households in the U.S. So Aaron’s 5.6 means that 5.6% of those households were watching him.  Anderson Cooper just started his first two-week stint guest-hosting. Personally I loved

That man just knows what to say. What is… touch down?!

After reading this I am sure the theme song is in your head, but what do we really know about the song? Find out more as I have the answer to that question here.