Liz Cheney braces for primary loss as focus shifts to 2024

CHEYENNE, Wyo. (AP) — Three weeks before the most significant election of her political career, Liz Cheney was nowhere to be seen as thousands of voters gathered for a massive midsummer rodeo and cowboy festival in Wyoming’s largest city. 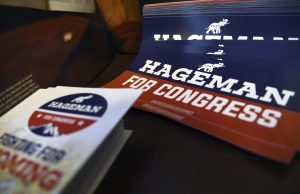 Election materials for Harriet Hageman sit on a table at the Wyoming Republican Party headquarters in Cheyenne, Wyo., on Tuesday, July 19, 2022. Hageman is running against incumbent Rep. Liz Cheney, R-Wyo., in the Republican primary election Aug. 16. Cheney has been largely absent from the campaign trail in Wyoming as she serves as vice chairwoman of the Jan. 6 committee investigating the breach of the U.S. Capitol. (AP Photo/Thomas Peipert)

Instead, the three-term Republican congresswoman was 1,600 miles away in Washington presiding over a U.S. House committee comprised largely of Democrats intent on exposing former President Donald Trump’s attack on democracy during the Jan. 6, 2021 insurrection. As the cowboy fest roared back home, Cheney railed against Trump’s failures.

“Donald Trump made a purposeful choice to violate his oath of office,” she said during Thursday’s hearing.

Dean Finnerty, a rancher from Wheatland competing in the steer wrestling competition, was not moved.

“I tell you what: I voted for Cheney when she ran last time and I won’t vote for her ever again,” Finnerty said. “I don’t know if she’s representing the conservative Americans that voted her in.”

Cheney’s unrelenting criticism of Trump from a Capitol Hill committee room represents the centerpiece of an unconventional campaign strategy that may well lead to her political demise, at least in the short term. Many Cheney allies are prepared for — if not resigned to — a loss in Wyoming’s Aug. 16 Republican primary against Trump-backed challenger Harriet Hageman. 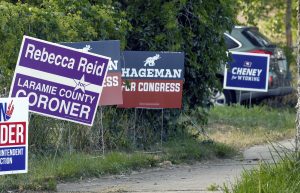 But as primary day approaches, there is also a pervasive belief among Cheney’s team that her unorthodox strategy in 2022 may put her in a stronger position for the 2024 presidential contest. Cheney’s fierce anti-Trump message as vice chairman of the congressional committee investigating the insurrection has strengthened her national brand while expanding a national network of donors and Trump critics in both parties who could boost a prospective White House run.

Cheney has yet to finalize any decisions about 2024, but she has not ruled out a presidential run as a Republican or an independent.

“The single most important thing is protecting the nation from Donald Trump,” Cheney said in interview with ABC News that aired Friday. She said she would make a decision about a potential White House bid “down the road.”

Cheney’s supporters understand the political paradox she faces in Wyoming, the state where Trump scored his largest margin of victory, 43 points, less than two years ago.

“She knew that she was shooting herself in the foot politically (in Wyoming) and she was going to walk around with a limp for the rest of her life,” Landon Brown, a Wyoming state representative and Cheney ally, said of Cheney’s unwavering Trump criticism. “But I could see this blossoming into something larger.”

Cheney, the 55-year-old daughter of former Vice President Dick Cheney, is perhaps the best known among a small group of so-called “Never Trump” Republicans weighing presidential bids for 2024. They include term-limited Maryland Gov. Larry Hogan and Cheney’s only Republican colleague on the Jan. 6 commission, Rep. Adam Kinzinger, R-Ill., who opted not to seek reelection this fall.

Trump would likely dominate a large field of presidential primary opponents should he run again, as he has said he will. But there is also a notable group of Republican voters eager to move past Trump and his continued fight to overturn his 2020 election loss.

Still, few believe that an outspoken Trump critic could ultimately prevail in a Republican presidential primary. The vast majority of Republican voters still approve of Trump.

And while her allies may be optimistic about her long-term future, Cheney would certainly like to avoid a blowout loss next month in her home state.

It won’t be easy.

Facing consistent and credible death threats, she has been forced to abandon traditional retail campaigning, trading public rallies and town halls for private events where her presence is often revealed to the public only after their conclusion, if at all.
She has essentially been excommunicated by the Wyoming Republican Party, which voted last year to censure Cheney before deciding to stop recognizing her as a Republican altogether. Local GOP offices offer yard signs for Hageman and many other Republicans on the ballot but not Cheney. 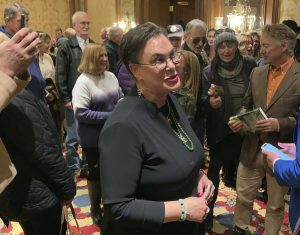 Left with few options, she has turned to Democrats for help. Her campaign website now features a link to a form allowing voters to change their party affiliation to Republican to participate in the Republican primary.
Kinzinger’s political team is helping to accelerate her crossover push.

“We need more principled leaders like Liz to ensure that those who want our democracy to fail don’t succeed,” Kinzinger told AP. “There has never been more urgency for pro-democracy voters to participate in primary elections.”
Cheney has resisted private pressure from some allies to shift away from her anti-Trump message. Many Republicans on the ballot this year who criticized Trump after Jan. 6 have since tried to sidestep the controversy by focusing on local issues in their districts, President Joe Biden or runaway inflation.

Cheney has refused to soften her message, instead leaning into Trump at the biggest moments of her campaign.

In her reelection campaign announcement video this May, she promised to “reject the lies” while not surrendering “to pressure or intimidation.” I n her closing statement at last month’s Republican primary debate, she called out “the lies of Donald Trump,” vowing, “I will never put party above my duty to the country.”

Meanwhile, Trump has made Cheney’s defeat a chief priority.

He called her a “despicable human being” on his social media site this month. And in May, Trump traveled to Wyoming’s second-largest city, Casper, to rally support for his preferred Cheney successor, conservative attorney Harriet Hageman.
As Cheney focuses her energy on the Jan. 6 commission, Hageman has barnstormed the state courting small, rural crowds in the traditional mold of Wyoming politicking. The approach is more like the one Cheney herself used to top a crowded Republican primary field to win Wyoming’s lone House seat in 2016.

Friends and foes alike have noticed her absence this year.

“I do know that Liz absolutely wants to be out across the state meeting with all our residents,” said Paul Ulrich, a former chairman of the Petroleum Association of Wyoming and a Cheney supporter. “It’s painful for her to have these security concerns. It’s disgusting that it’s come to this.”

Dean “Doc” Schroeder, a registered Democrat now planning to change his registration to vote for Cheney in the GOP primary, has been impressed by Cheney’s leadership on the Jan. 6 commission. He said it may not matter whether the congresswoman spends more time in the state given Wyoming’s overwhelming Republican majority.

“A very large proportion of that wouldn’t care if she came flying into the election on angel’s wings. They’re not going to vote for her,” said Schroeder, a retired psychologist and Frontier Days Rodeo volunteer. “So I don’t know that it has hurt her anything. And I’m a perfect example of how her behavior in Washington has helped her.”

Some Cheney allies are skeptical there are enough Democratic crossover votes to put her over the top next month.

“I wouldn’t want to put any money on this race,” said Marilyn Kite, a former state Supreme Court justice who supports Cheney. “I hope like heck she’s successful, but if she isn’t, maybe her being true to her oath truly is more important in the long run.” 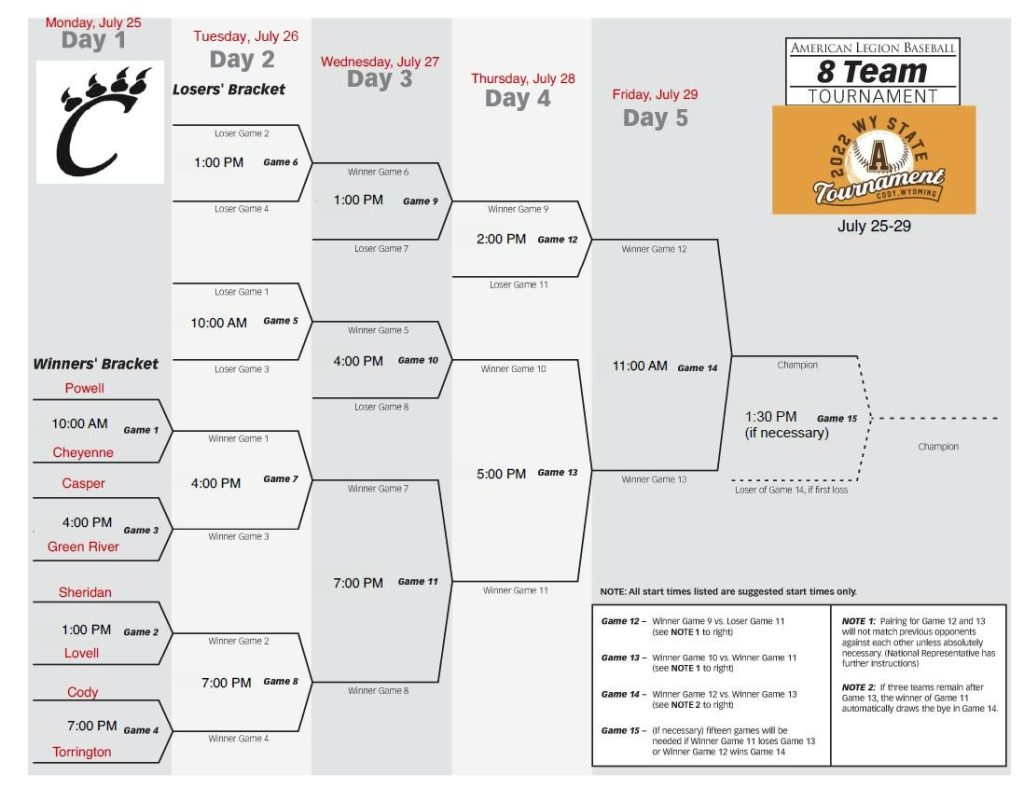 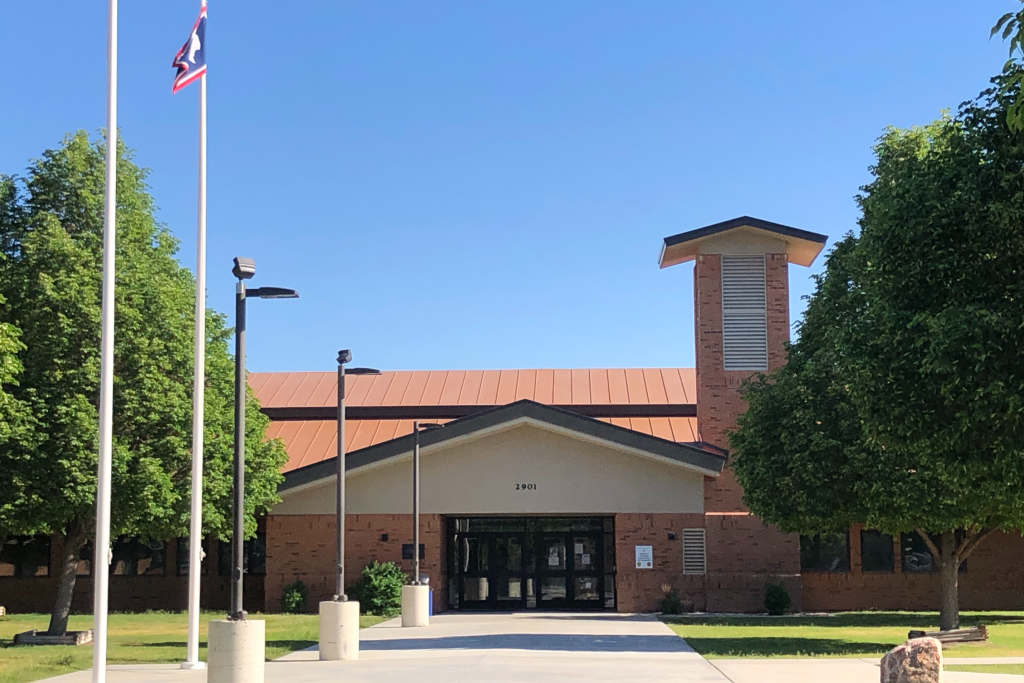