With construction projects surrounding Cody on highways leading out of the community in three directions, motorists are reminded that a new law will soon be in place requiring them to move over for maintenance, construction and utilities workers and vehicles when traveling on Wyoming’s interstates and highways.
Starting July 1st, Wyoming’s Move Over law will now include those workers in addition to emergency responders such as the Wyoming Highway Patrol. The state Legislature approved the changes to the Move Over law during this past legislative session. The new Move Over law requires motorists to do what they currently do when encountering an emergency vehicle that has pulled over.
Over the course of his 37 and a half years at WYDOT, Tony Avila, area foreman for the Wyoming Department of Transportation, says he and his crew have experienced around 40 incidents where their WYDOT vehicles were sideswiped, mirrors were damaged or vehicles rear ended. 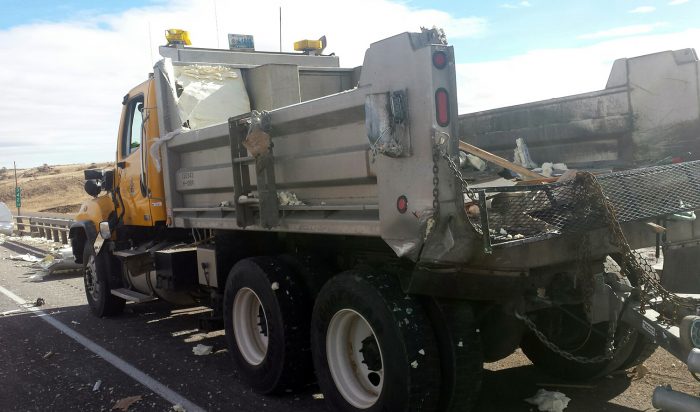 WYDOT has advanced signs alerting motorists of upcoming construction, changes in traffic patterns and reduced speed limits, and is currently making signs about the new requirements as a way to help educate the public.
Motorists can be fined $200 for failure to move over.
–Attached are two images. One shows a WYDOT vehicle that was sideswiped by a commercial truck in early 2015. The other shows a WHP patrol car with Save a Life, Move Over on the rear window

High Vehicle Traffic and No COVID-19 in Yellowstone

Cubs Sweep Riverton for 8th Win in a Row