Westerhold’s philosophy on his music has remained unchanged since he began accompanying himself with a guitar given to him by his parents. For him, music is a hobby and something he enjoys. 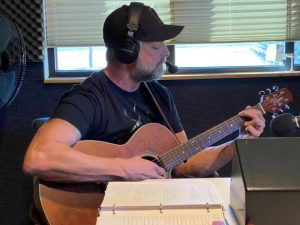 For a while, Westerhold’s primary focus has been his children. That meant he performed less frequently in recent years and his kids were “involved in everything.”

The best place to hear Westerhold is at the Chamberlin Inn during the summer. The local hotel features local musicians on Wednesdays and Fridays.

Wednesdays are usually the best time to catch Josh performing.

“There’s usually not a Wyoming American Legion baseball game on Wednesday,” he said.

Listen to the full interview with Josh here. Check out the rest of our interviews with local musicians on our Partyline Thursday Music Spotlight playlist on Soundcloud.

Yellowstone Camping: Do You Have a Reservation?