NEW YORK (AP) — Creem, which billed itself as “America’s only rock ‘n’ roll magazine” during two decades of existence that ended in 1989, is being revived next month. 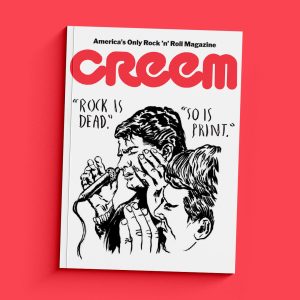 This image shows the September 2022 issue of Creem. The magazine, which billed itself as “America’s only rock ‘n’ roll magazine” during two decades of existence that ended in 1989, is being revived this fall. (Creem via AP)

The return is a remarkable story of persistence by J.J. Kramer, who was bequeathed the magazine at age 4 upon the death of his father, founder Barry Kramer. It will reappear during far different times, with a marketing plan that the late writer Lester Bangs or makers of the fake “Boy Howdy” beer could hardly conceive of.

The first new issue, a glossy quarterly, is due out in September and only available to people who spend $79 for a subscription.

Founded in Detroit, Creem was the impish, slightly rude younger brother of Rolling Stone. The name was an intentional misspelling of the rock band Cream, one of the first editor’s favorites.

Though known best for Motown soul, Detroit was also a rock ‘n’ roll hotbed with artists like MC5, Iggy Pop, Alice Cooper, Mitch Ryder and Bob Seger. Hard rocking bands, and then the onslaught of punk, provided the magazine’s backbone in its 1970s heyday.

Rock stars weren’t put on a pedestal in Creem, and its reviews could be nasty — along with sexist and profane. Bangs was the toughest, and his feud with Lou Reed was legendary. Creem poked fun at a stuffy Dewar’s scotch profiles ad campaign by picturing artists holding beer cans emblazoned with a “Boy Howdy” logo drawn by cartoonist Robert Crumb.

In a 2019 documentary about the magazine, former R.E.M. singer Michael Stipe recalled first seeing Creem while in high school detention, realizing that he’d found the perfect gang of misfits.

“Buying Creem was a little bit like buying Playboy,” actor Jeff Daniels said in the documentary. “You didn’t want your parents seeing either one of them.”

Kramer’s death from a drug overdose in 1981 marked the beginning of the end. His son was named in the magazine’s masthead as a preschool “chairman of the board.” Barry Kramer’s widow, Connie, as publisher and acting on her son’s behalf because he was a minor, sold the bankrupt publication in 1985. Creem ceased publishing four years later.

With all the bravado of a 9-year-old, J.J. Kramer remembers telling his mother he would get it back some day.

“I’ve really spent most of my adult life trying to get to this point,” he told The Associated Press in advance of the revival. “It’s something I felt like I had to do. There’s a magnet that draws me to Creem. It’s almost like it was predetermined in a way that I couldn’t fight it.”

Kramer regained control of Creem, although it took several years. It helps that he’s an intellectual property attorney.

Now he’s chairman, again, and has put together a plan for the revival along with John Martin, a former Vice publisher who is CEO of Creem Entertainment. The idea is to make Creem the centerpiece of a media company that includes podcasts, merchandise and branded entertainment.

“Why is there not a Creemfest?” Martin asked. “That’s something that sounds like it should exist and it will exist.”

Yet it’s not the 1970s anymore. Rock ‘n’ roll is no longer as influential in culture as it once was; popular music is dominated by rap and pop. The music press is as diffuse as music itself. The well-made rock ‘n’ roll glossies on the market, like Mojo or Uncut, are British-based.

Kramer and Martin believe there’s still room for a publication that pulls rock ‘n’ roll fans together, from people who like HAIM to fans of Metallica. The world also needs people who can write about the genre with attitude, Martin said.

“When was the last time you laughed when you read about music?” Martin said.

While Bangs, who died in 1982, is no longer around, there are many new voices important to the current scene, some working on forums like Substack, he said.

The first issue’s mix of articles speaks to Creem’s intended breadth. For nostalgists, there’s an excerpt of a never-published book on the Who, a reevaluation of a 1972 rock album put out by the Osmonds and a revival of the “Stars’ Cars” feature with Slash and his wheels. There are stories on newer artists of various popularity levels like Mac DeMarco and Amyl and the Sniffers and personalities from rap and R&B like Lil Aaron and KeiyaA.

Samir Husni, founder and director of the Magazine Media Center, said he’s already paid for a subscription and is impressed by the new business plan. Plenty of people remember Creem fondly and would be curious about a reboot, he said.

“They are looking for customers who count, instead of counting customers,” Husni said.

That said, magazine revivals are more likely to fail then succeed, he said. A brand may have value, but not if people think time has passed it by. Husni said Creem may have to rethink its plans not to offer the magazine on newsstands or in bookstores.

The revival has been draining physically, emotionally and mentally, Kramer said. There were a number of times he could have — maybe should have — walked away, he said.

But he and Martin said they are convinced there is a market for the reimagined Creem, and they have the right plan to reach it.

“We’re not a cover band,” Kramer said. “We are pulling this magazine and brand forward.”