The 2020-21 Worland Warrior Basketball team have pieces to their puzzle that are set to fit. “Make sure the talent fits together, finding the five guys that skills correlate with each other.” was Head Warrior basketball coach Aaron Abel’s response. Before the look at the current team let’s take a glance at the 2019-20 team and what was accomplished before the Covid-19 shutdown of the State 3A basketball tournament.

2019-2020 Worland Boys Basketball finished the Wyoming 3A season 24-1 overall and 5-1 in the Northwest Quad which put them second behind the Lander Valley Tigers. The Warriors and the Tigers played three times last season. First meeting was in Lander. A game Worland would take 77-69. The second meeting was in Worland and was the final game of the regular season that would determine the Northwest Quad Champion and would set up seeding for the Regional Tournament in Lyman. Lander Valley would come into Worland and give the Warriors their first loss of the season. Lander Valley finished at 21-4 overall and 5-1 in the Wyoming 3A Northwest Quad. The win would give the Tigers the Northwest Quad Title and the number one seed at the Regional tournament. The third meeting of the Warriors and the Tigers would be the Championship at the Regional Tournament in Lyman. The Warriors would win the West Conference Title 81-73 and would be the top seed. The stage was set. Then it was canceled. 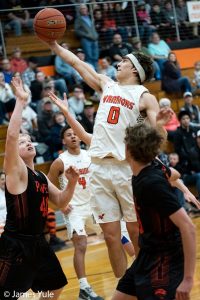 Coach Abel talked about the team from last season. “That’s what last years group had. It wasn’t the most talented team we’ve had but it ended being the most successful team on the court that Worland ever had.” The Warriors had multiple scorers on the court at one time. A team that had a skillset that matched and feed off each other. A chemistry that will have to be recreated. “Everyone is going to point at what we have back. We lost the 3A Player of the Year (Luke Mortimer).” Mack Page and Rudy Sanford were both All-Conference and All-State last season. Mortimer won Player of the Year and the Wilford Mower Award as the top basketball player in the Wyoming 3A West Conference.

“We have a lot of question marks. Can we shoot the ball? Can we put four guys on the court that they all can shoot the ball at the high level we did last year?” Coach Abel would ask of the current team in it’s first week of practice. Having an undersized lineup and still coming up with a high level of offensive and defensive rebounds are also questions that will need answers. “The guys have been working hard, week one down and excited to get to week two.” 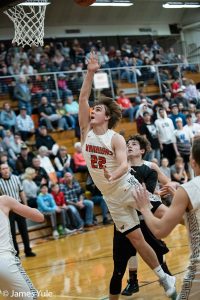 Taking a look at this seasons 3A Northwest Quad “The four best teams in 3A might be all in the 3A Northwest.” Coach Abel believes. Lander Valley returns All-State and All-Conference guard Brian St.Clair.  All-State  and All-Conference players Trayson Spoonhunter and  Niieihii Black graduated. Each are playing at the next level. The Tigers are in a similar position as the Warriors. They both graduated very talented players but are returning talent as well. “Same thing we got going on with guys like Brock Douzenis, Court Gonzalez, and Kolter Wyman. Guys that came off the bench last year.” added Coach Abel. The Warriors have depth and lots of talent.

The Lovell Bulldogs who finished last season third in 3A Northwest Quad 6-16 overall and 1-5 in the Quad. Lovell will return an All-Conference player in Zeke Newman and add a loaded Sophmore class to their mix. The Bulldogs are a  team that beat Mountain View in the first round of Regionals and lost a buzzer beater to keep them from advancing to State last season. Powell Panthers basketball added a new, old Head Coach in Mike Heny. Coach Heny was the Panthers Head Basketball coach seven years ago for four seasons. Powell will return All-Conference players in Landon Lengfelder and Mason Marchant. The Panthers finished the 2019-2020 season 11-13 overall and 1-5 in the 3A Northwest Quad. Powell made the State tournament but due to the pandemic did not compete.

“If we get to State it will be earned. We’re looking to get to the State Tournament for the seventh year in a row.” Warrior Coach Aaron Abel would say again. “If we do it, it will be earned.” The Warriors will start their season Tuesday December 15th at 7pm in Thermopolis. You can listen to Worland Warrior basketball all season long on 104.7FM or 1340AM and at this site mybighornbasin.com.