The Cody Wrestling team was home on Thursday hosting Worland for a dual. The Bronc Grapplers would win 11 of the 14 match-ups on the evening, downing the Warriors 61 points to 12.

Coming up this weekend.

The Cody Wrestling team following their dual against Worland is back in action this weekend as they’ll be taking part in the Ron Thon Memorial in Riverton.

Full results from the Ron Thon and the Dual vs. Worland coming your way later.

The Cody Broncs Swim team is making the trek over to Buffalo for the Buffalo invite which takes place today.

The Alpine Ski teams are back at the Casper Mountain Ski Rsort for another Casper invite all weekend.

And last but not least the Cody Basketball teams will be hosting their Park County Rival, Powell, for another double header of high school hoops action. You can listen to both Cody’s games vs. Powell on the voice of Cody Sports, KODI. Girls tip off at 5:30pm with the boys to follow at approximately 7.

Over on the ice, the Yellowstone Quake Hockey team is back on the road for the third weekend in a row as they take on the last placed Sheridan Hawks. Both those face-offs get underway today and tomorrow with puck dropping at 7:30pm both nights.

Over in the College Ranks…

Both Northwest College Basketball teams are back in action, on the road this weekend. Last night both teams squared off agaisnt Western Wyoming Community College. Tomorrow, both teams will be in Cheyenne to face Laramie County Community College. Women tip-off at 2pm with the men to follow.

Meanwhile, the Northwest College wrestling team is scheudled to be in Dickinson, ND., today for the Tyler Plummer Classic

In some more College Hoops action…

The Wyoming Cowboys hit the road once again facing off against Air Force on Friday afternoon at 4 p.m. in a contest on the Mountain West Network. The contest will be the 122nd meeting between the two schools in a series that dates back to 1958. Fans can listen to the contest live on KODI.

Meanwhile, the Wyoming Cowgirls will be home for the second straight game as they Welcome Nevada into the Arena Auditorium for another Mountain West Conference match-up. That game tips-off at 2pm and will be heard live on KODI.

Up first, a look at area pro action:

The Denver Nuggets travel to New Orleans for a 6pm tip-off tonight while the Utah Jazz are in to Memphis to go against Ja Morant and the Grizzlies. That game begins at 6pm also.

Then on Sunday, both the Nuggets and Jazz are back in action again. This time the Nuggets travel to Milwaukee to face the Bukcs for a 5pm start time while the Jazz go to Minnesota to play the T-Wolves at 6pm.

Over on the Ice, the Colorado Avalanche, also, return to action this weekend. The Avs, winners of 8-strgith will take on the Chicago Blackhawks tonight at 6:30, in Chicago. On Sunday the Avalanche return home to host Buffalo for a 6pm start time.

And now over to the NFL:

Championship weekend is upon us as the Cincinnati Bengals travel to Kansas City to take on the Chiefs. That game gets underway at 1 in the afternoon, on Sunday.

Then, in the second game of the day, it’s the LA Rams hosting the San Francisco 49ers for a 4:30pm kick-off.

Winners of those two games advance to the 56th Super Bowl, which is scheduled to be played on Sunday February 13th. 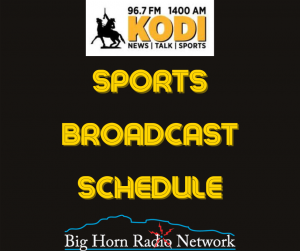