Memorial Day 2022 was wet and cold in northwest Wyoming. However, the weather was severe enough that many drivers got caught in the snow at higher elevations, needing help from W.Y.D.O.T. to resume their journeys safely.

W.Y.D.O.T. reports an “interesting” weekend on the Wyoming Highway 296 – the Chief Joseph Scenic Highway. Two to three feet of snow was reported on some road sections. 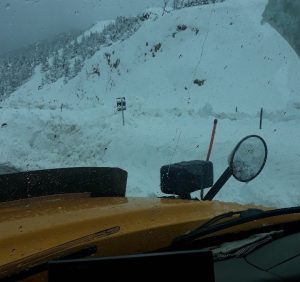 Snowplow drivers spent “the first weekend of summer” plowing and helping free tourists and vehicles trapped in the snow.

Multiple people were stuck on the top of Dead Indian Pass after their vehicles were snowed in. In addition, at least four vehicles got stuck on the switchbacks on the west side of the pass. W.Y.D.O.T. crews were able to rescue the stranded drivers while clearing the Chief Joseph Scenic Highway of snow.

A different problem occurred on U.S. Highway 14/16/20 – multiple “bowling ball-sized” rocks were falling on the road between Cody and the East Entrance to Yellowstone National Park. Rockfalls were reported all day.

Again, W.Y.D.O.T. personnel worked to clear that road of hazards. But they had an easier time than they might have anticipated as the East Entrance faced its own dangers. 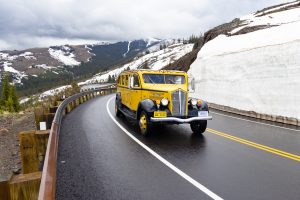 Meanwhile, the East Entrance to Yellowstone National Park closed at least three times over the extended weekend due to the late-season winter weather.

The East Entrances and Sylvan Pass spent a significant portion of the extended weekend closed due to winter weather. As did the Beartooth Highway, which opened at noon on Friday, May 27 – and closed at 6 p.m. the same day.

That same day Yellowstone officials held a ribbon-cutting for the Dunraven Pass, which opened at 12:30 p.m. that afternoon. It’s the first time the park’s highest-altitude road is open to tourists after two years of intense construction.

However, the Dunraven Pass closed at the same time the Beartooth Highway closed on Friday. The road stayed closed for the entire holiday weekend and was still closed on Monday morning.